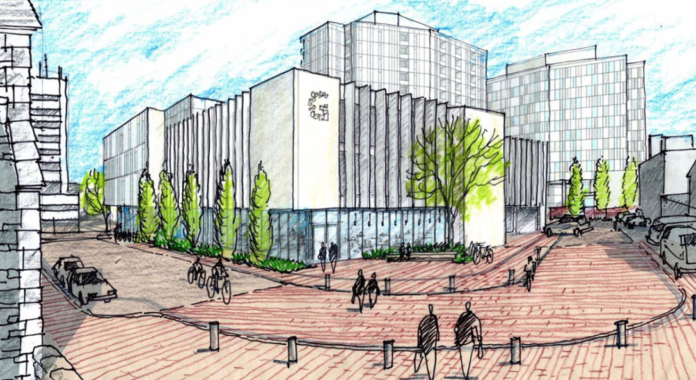 An updated urban design master plan, public parking construction budget and action plan for the Baker District redevelopment is expected to be approved by Guelph council on Wednesday.

“This is a really exciting moment in this project,” said Jayne Holmes, deputy chief administrative officer of infrastructure, development and enterprise services. “The city has been working toward the redevelopment of this part of downtown for almost 20 years and we’re on the cusp of making our vision to create a renewed area of activity, commerce and civic space a reality.”

The report proposes two levels of underground parking in the Baker District and a construction budget of $15.9 million for public parking. This plan estimates 156 public parking spaces. The developer would pay for the construction of 260 private spaces for people living in the residential towers.

Site constraints including shallow bedrock prevent more than two levels of underground parking as part of the new redevelopment.

Construction costs for the proposed 156 underground parking spaces previously estimated at $75,000 per stall have spiked in cost. According to a staff report, with inflation, construction cost escalation, designing to accommodate ground water conditions, and adding all soft costs, such as detailed design, contingency and construction management, the total cost is now $102,000 per stall, for a total estimated cost of the two-level underground public parking of $15.9 million.

The updated urban design for the Baker District is the result of more than three years of community buy xanax prescription engagement, modifications to the site layout as approved by Council in fall 2020, and regulations in Guelph’s Official Plan, Downtown Secondary Plan, Urban Design Manual and Downtown Streetscape Manual.

“In addition to the 600 people who will live and bring more vitality to the downtown core, the centrepiece of this landmark development is a state of the art library that will serve as a destination, bringing even more people downtown,” said Jonathan Westeinde, CEO of Windmill Development Group who are leading the planning, design and development of the Baker District.

New financial realities and the lack of an institutional partner forced changes to the site layout. Modelling by the Altus Group estimates that the redevelopment project will provide a total of $969,700 a year through property taxes. Modelling also forecasts new Guelph-wide spending on goods and services by workers and new residents of the development at $18.3 million per year.

“We’re proud to be working with the City of Guelph as we look beyond reducing harm towards having a net-positive impact on people and the planet via the way we develop and build our communities,” says Jenny McMinn, managing director for Urban Equation.

A grant from the Federations of Canadian Municipalities’ Green Municipal Fund for the development of this plan needs council’s approval.