Home Around the province Big changes are coming to Huntsville’s downtown region, and they may begin...
Facebook
Twitter
Email
Print
Copy URL 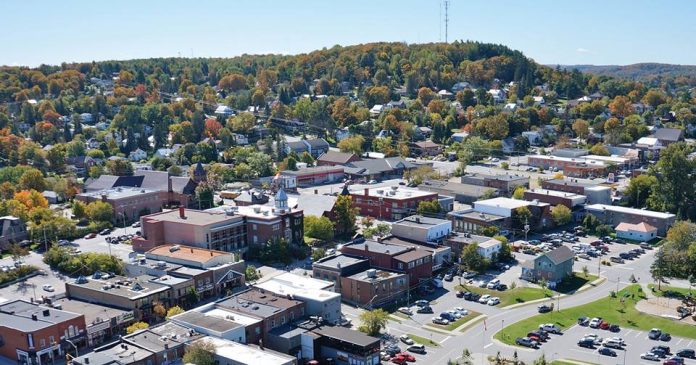 The District of Muskoka is beginning the processes of replacing underground infrastructure in some of Huntsville’s busiest areas. Watermains and sewer pipes have a lifespan of about 50-60 years, and since the town is due for a changeup, Huntsville’s town council has taken the opportunity to revisit aesthetic and accessibility concerns in the area.

Following a study of the downtown core, proposed designs were drawn up to give the bustling business area a facelift, including wider pedestrian areas, and landscaping with more trees and potentially boulders.

“The idea is bringing nature into the main,” says Huntsville town councillor Nancy Alcock. A major area of focus for the next couple of years will be expanding the downtown’s activity beyond the main street to surrounding blocks. “It’s about animating what has been dead space for a long time,” Alcock says. “We’re doing a whole lot of connectivity, bringing some of those empty spaces to life.”

So far plans for the work indicate that infrastructure replacement work will be done along main thoroughfare Muskoka Road 3 during the 2019 construction season, with Main Street replacement and restructuring and beautification to be completed the following year.

The project has a tentative schedule that would see closed lanes and blocked sidewalks on some of the town’s prime retail and lodging space on a rolling basis from June to October of this year.

Partial lane closures for construction was proposed in four stages:

While the schedule is nowhere near decided, as tenders have not been awarded yet, business owners in Huntsville expressed some concern at a March 28 community information session.

“There are only four months that we make our money for the whole year,” Chirag Patel, owner of Rodeway Inn was quoted as saying at the meeting.

Alcock says there’s been a lot of consultation going on with the Business Improvement Association and the Chamber of Commerce. “Schedules may not be finalized yet, but work is going to be rolled out in phases,” Alcock says. “Potential impact on our core area is profound if it’s not rolled out properly.”

Alcock says Muskoka wide, the year-round population of 62,000 residents balloons to 140,000 in high season. Those numbers account for seasonal residents; numbers of visitors and tourists are over and above that.

Tenders for the first phase of the project were due on May 3, but recommendations have not yet been brought to council.