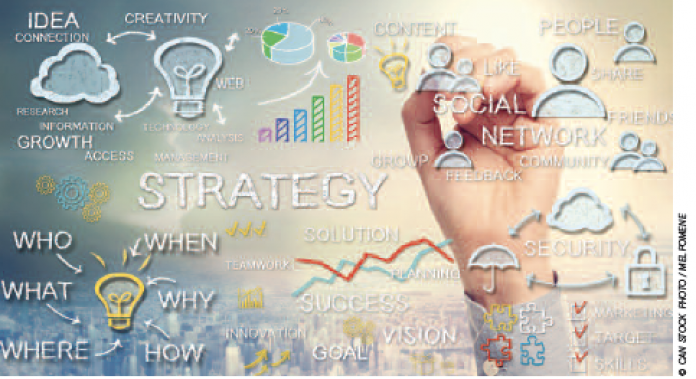 We can talk about lack of sales or poor cash flow or the sudden crisis with a client as our largest issue, but no problem cost us as much pain and dollars as the biggest problem of all: how our mind deceives us during every business day. Not only do we not realize that it is happening, we don’t want to believe that it is possible.

First, our mind deceives us into making choices that are not good for us, and we are completely unaware at the time that this is happening. A simple example is the hiring of new employee whom we are certain is the one we want. Yet, a year later we are watching that person depart from our company despite our huge investment in the individual.
The actual statistic is that 47 per cent of new employees have gone from the company or are looking for a new job after 12 to 18 months.

The second frequent issue is that we react inappropriately to a difficult situation, fully unaware that we are harming our chance of getting the best solution.

Are these natural reactions?

The sad answer is ‘yes’; they occur as natural human reactions. Because of deep-seeded reasons, they become a prime reaction well ahead of any mediating or logical thought.

An example of an inappropriate reaction

You receive an email from a business customer or associate that states, in some manner or other, that you and your department or company are incompetent, and you are dealing with their situation in the wrong way. As indirect as the person’s words may be, the message to you is very blunt: you’re a jerk.

Most people’s immediate reaction upon receiving such a message is to think something along the lines of: “He can’t get away with that. I’ll show him who’s the jerk!” Once you calm down, the average, rational, businessperson will begin to craft a response to the email, carefully outlining where the customer has gone wrong, perhaps tossing in a little dig towards the client along the way. (“Why not? If he can do it to me, I can do it to him?” – might be the rationalization.) Off goes your email, and in no time at all, you get a response more caustic than the one before.

The exchange has begun to escalate, and you are not one step closer to resolving the difference. In fact, most likely, you would be farther away from a solution than ever. Since management is all about finding solutions to problems something is not taking place the way it should.

Before we attempt to show you where you (and the average person) has gone wrong by responding this way, we want to explain where your usually clever brain has let you down and why. Then, we will tell you what you should do to resolve this issue as quickly and as painlessly as possible.

Why this kind of reaction?

Among the human’s and animal’s most important drivers is the ‘fight or flight’ reaction. This allows us to survive another day. It takes priority over all other reactions – as well it should, since survival is paramount to continuing on with life. If the enemy is clearly much bigger or stronger than us, we will back away (flight) such as if we are confronted by a person with a pistol or knife when we ourselves are unarmed. Or, the other person has a much higher rank, socially or business-wise. However, in most human situations, we choose ‘fight’ over ‘flight’ to show that the other cannot dominate us.

The mind that ‘controls’ us

The brains amygdala glands cut in within 1/1,000’s of a second to prepare us for battle. It institutes 45 physiological changes so that we are ready to fight, including making our logic processor less ineffective. We are set to win by brute force. This is natural; it has evolved from hundreds of millions of years of evolution.

However, in today’s society, brute force rarely offers the best answer. While this paper is too short to lay out the full corrective strategies, you can never go wrong by drawing a third individual into your situation. She can read that defensive email before you send it out. Try to keep in mind the axiom we call the GPS Lady: Rather than laying blame, justification, rationalization, or the need to prove that you are right, simply ask yourself: “What can I do now that will move us in the direction of a solution?” Then go there. Easier said than done, however.

The mind that ‘deceives’ us

Nobel prize winner, Dr. Daniel Kahneman wrote a book about the mind’s deceptive behaviour, called Thinking Fast and Slow, which became a New York Times best seller. Its conclusion is that the mind deceives us, and we don’t even know it is happening. That deception frequently leads us in the wrong direction.

The easiest solution is the same as above: draw in a third party who has no stake in the outcome when contemplating an action and listen carefully to that party. You probably won’t like what you hear but it probably is more logical for the situation than your own (half-baked) solution.

The cost of unnecessary business errors caused by such illogical thinking, is enormous. Those errors that you make are the same ones that you can easily advise others not to make. (“Do as I say, not as I do.”) Beyond business, in society these emotional, ‘natural’ reactions lead to serious social issues such as teen-age pregnancies, murder, and worst of all, war. Everybody knows that these problems do not make sense, yet, day after day, the horrors keep repeating themselves.

Besides drawing in a third party for advice, we recommend you follow the 1-2-3 steps in any confrontation.

How big is this problem?

While this paper focuses on slipping along the mind-deception slope of you, the reader, the magnitude of the problem reaches home when we realize it affects not only you, but also everyone else in your company – and all those people in all the other companies.

Think of how often you have seen others make mistakes when, to you, the direction towards a solution is so simple. That other person has been captured by his deceptive mind. This time, you are the third party without an emotional stake in the outcome.

Our message is that you can do something about mental deception within your own domain – and you should. The wise person will.