Home Around the province Canadian tech companies thrive in US market – But what about here...
Facebook
Twitter
Email
Print
Copy URL 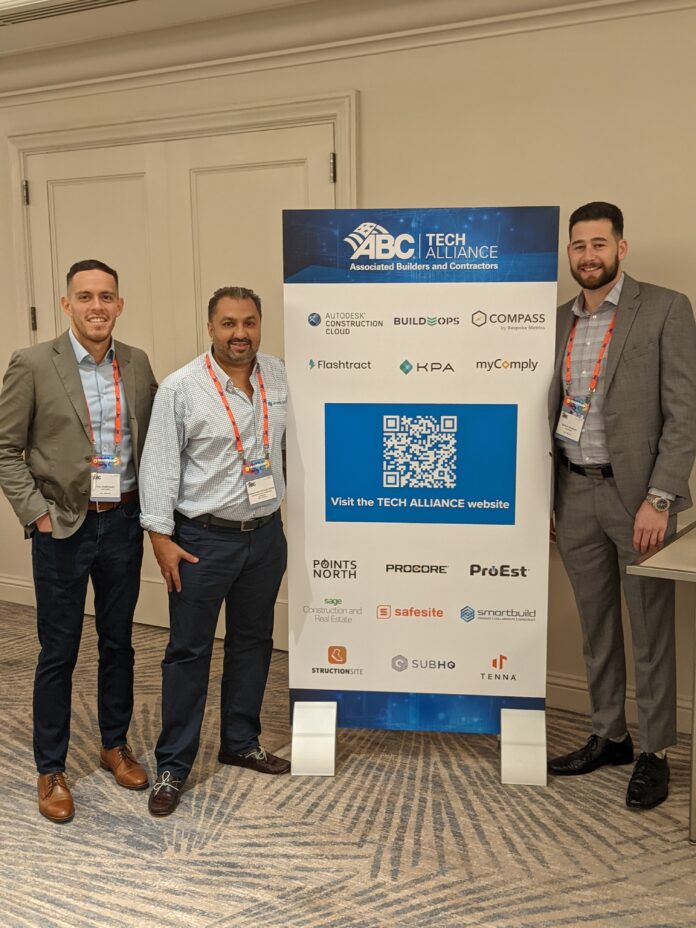 Canadian construction tech was well represented at the recent Association of Builders and Contractors (ABC) Annual Leadership Conference in Florida. The conference hosted 69 member chapters and more than 375 Contractors.

SMARTBUILD and myComply were two of the companies that have been selected into the Tech Alliance and are enjoying success in the US Market – but less success here at home.

The Tech Alliance is made up of a selection of 15 companies that add value for ABC members. The group was created to help ABC become a leader in construction technology, giving members a resource to further their innovation efforts. (ABC is a national association representing primarily non-union contractors; its Canadian/Ontario counterpart would be Merit Ontario.)

to be partnering with associations and clients south of the border, but there’s a dirty little secret that lurks in the Canadian Contech market: that’s actually the way we have to build our businesses. We have to focus on developing US customers first, while Canadian customers may follow later on.

Why? Well, according to myComply’s Neil Reddekopp, it’s because Canadians have a habit of shrugging off our compatriots’ expertise, assuming the real talent lies elsewhere.

myComply has found great successes in New York, for instance, having recently signed a contract with the New York Department of Buildings. The compliance tech firm also found great reception with many private companies in the US, who were just far more ready than their Canadian counterparts to take the plunge into a tech solution that works.

Reddekopp is confident that in time Canadians will catch on to homegrown tech solutions, but it may only be after they’re successful elsewhere. “Canadians are largely followers in that space,” he said. But in time, Canadians will have to catch up with tech solutions or risk being left behind.

SMARTBUILD founder Zulq Malik has experienced first-hand the difference in approaches between Canadian and US company heads. Being from Toronto, Malik had the opportunity to work in the US early in his career and appreciated the go get’em attitude that the Americans embraced. He feels that is why they have world dominance in almost all sectors of the economy.

“As we started SMARTBUILD, I was asked how big do I want to grow the firm, I said I am happy with X number of clients!” Malik said. “My mentor, Rick Shaw, screamed at me and said ‘You are so Canadian! Why don’t you want to have a SMARTBUILD office on the moon!’”

“American contractors know what they want and are ready to move forward if they like what they see after a 40 min demonstration, unlike the conservative approach taken by Canadian Companies,” Malik said.

Here’s our challenge to you: Canadian contractors don’t have to wait to see what American companies do before trying Canadian tech. You don’t have to follow the pack. Some of the best tech companies in the world are right in your backyard.

Supporting Canadian companies benefits our country’s economy, but beyond that it allows you to contribute to a growing talent base in your own community.

“With our powerful, practical and affordable solution, SMARTBUILD is becoming the go to platform for contractors of all size,” the company says in a statement.