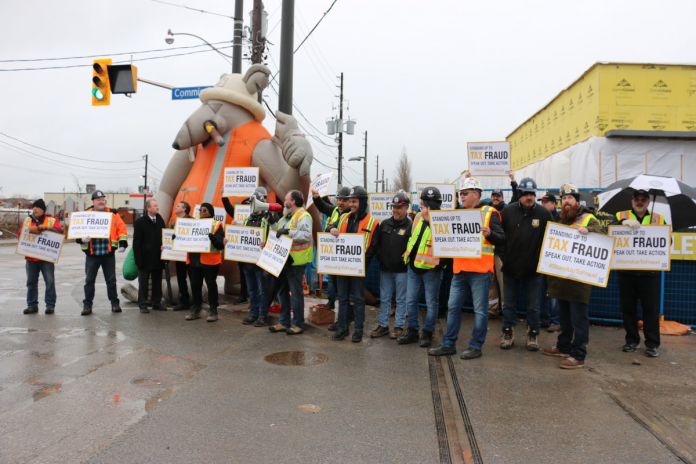 The Carpenters District Council of Ontario (CCDO) has co-ordinated a set of events to raise awareness of tax fraud and the proliferation of the underground economy in the construction industry.

The GTA events, scheduled for the US tax filing deadline of April 15 with the United Brotherhood of Carpenters and Joiners of America (UBCA), included an early-morning picket at a non-union site in east end Toronto, and a set of press conferences, including one at Toronto City Hall.

The protest has special significance in Ontario, with the provincial government’s Bill 66 legislation, which threatens to remove construction union’s collective bargaining authority for several municipalities and public agencies that were considered to be “construction employers” under the old rules.

While Yorke said the April 15 protest was not a direct response to Bill 66, he said in a published report that the Ontario government has put forward legislation to dismantle collective agreements. “The argument of the Carpenters is, in terms of a bulwark against increasing tax fraud and the underground economy, one of the best policies a city can have is a collective agreement with the construction sector,” he was quoted as saying.

Bill 66 downloads authority and gives public entities 90 days to decide if they want to continue existing collective agreements – creating some urgency for the union’s lobbying efforts.

The union says under the current working arrangements, the City of Toronto has taken a variety of steps aimed at restricting the underground construction economy. In addition to collective agreements, Toronto has established a Fair Wage Office and a Fair Wage Policy.

“The benchmarks that the City of Toronto has implemented are extremely effective at reducing the losses and impact of tax fraud in the construction buy antibiotics online fast delivery industry,” Yorke said in a statement. “We want to highlight key partners in the construction industry and the example they have set because their actions exemplify how a municipality can operate effectively with collective agreements and other preventative tax fraud measures.”

The CCDO cites a recent Prism Economics and Analysis report that observes that construction industry tax fraud has resulted in revenue losses to government sand government agencies of $1.8 to $3.1 billion annually between 2013 and 2017 in Ontario.

In addition to the City Hall press conference and 6:30 a.m. picket at the non-union website, CCDO members arranged presences at Canadian Revenue Agency (CRA) and Waterloo Regional Offices.  (The Waterloo Region is one that will most likely elect to end the collective agreements under the Bill 66 provisions.)

The union says that while other Ontario municipalities are supporting Bill 66 and other political action to “open the door for contractors to engage in improper tax filing practices, the systems that the City of Toronto has put in place tor restrict the underground economy are ultimately benefiting taxpayers by ensuring that their tax dollars are being allocated and spent effectively.”

“When tax fraud takes place, it prevents the employees of contractors who partake in unfair practices from gaining eligibility for workers compensation, unemployment, and from continuing to personal retirement plans and social security,” the CCDO statement said.  “This is also what leads to money being taken from public funds designated for items like healthcare and social services.”

The union asserts that when collective bargaining arrangements are not in place, many employers, inducing those for taxpayer-funded projects, fail to properly withhold or pay income/employment taxes for their workers. “Many workers are paid off-the-books or are styled as independent operators, enabling contractors to avoid proper tax practices,” the CCDO statement said.