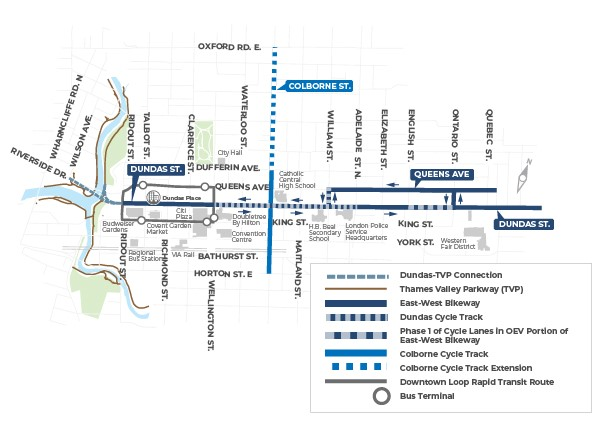 The City of London started construction on three cycling projects that will improve connections through and into the core area.

Construction began August 4 on the Dundas Cycle Track, and is slated to begin in the coming weeks on the Colborne Cycle Track, with completion scheduled for November 2020.

Phase 1 of construction on the Dundas-TVP Connection will see shovels in the ground later this month, with Phase 2 scheduled for construction next year, completing the connection between the Forks of the Thames into Dundas Place downtown.

The Dundas Cycle Track will connect Downtown with Old East Village by creating a permanent, separated east-west cycling route on Dundas St. between Wellington Street and Adelaide St. North. The west end of the project will connect into Dundas Place and the east end of the project will connect into new cycling facilities being built along Dundas between Adelaide and Ontario streets as part of upcoming infrastructure renewal work in the Old East Village. Separated cycle lanes will also be added on William St. from Dundas Street to Queens Ave. as part of this project.

The Dundas-TVP Connection is designed to improve the link for pedestrians and cyclists between the Thames Valley Parkway and Downtown. It will also create a connection for cyclists to the East-West Bikeway. Having an improved cycling connection will make it easier to reach existing transit routes, as well as planned rapid transit stops for this area.

Phase 1 of construction, to be completed this year, will create a separated eastbound cycling facility on Riverside Drive from Kensington Bridge to Wilson Ave., and install a pedestrian and bicycle signal that will allow cyclists and pedestrians to cross Riverside Drive at Wilson Ave.

Phase 2, slated for 2021, will finalize the link between the TVP and Downtown by creating a separated cycling facility from the Thames River into Dundas Place.