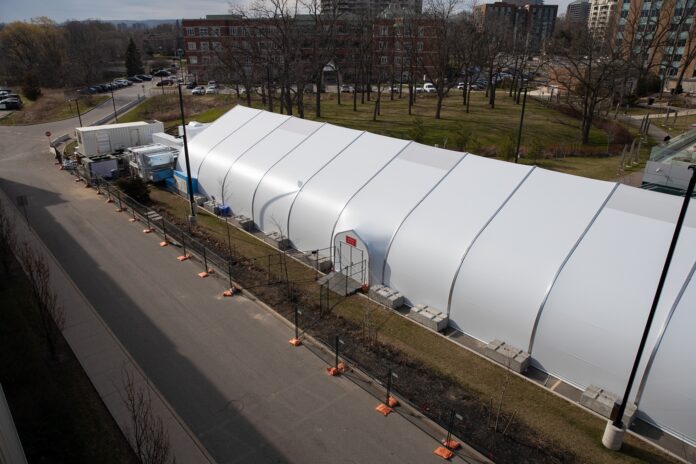 Long, white peaked structures have cropped up around Ontario hospitals — and while they use the same blueprint as military barracks and greenhouses, construction workers are working to transform them into state-of-the art hospital wings.

Although they may not look it, the structures are field hospitals. BLT Construction has built four such buildings in Ontario and worked on two in Quebec to house overflow patients as COVID-19 tests hospital capacity.

Field hospitals in themselves are nothing new. The model deployed in Vancouver by the Canadian Red Cross has been used to respond to more than 25 disasters over the past decade, including a cyclone in Mozambique and the Nepal earthquake.

Paul Waddell, a vice-president at BLT Construction who heads up its rapid deployment team, says that while the concept may evoke images of MASH-style canvas tents, his team has worked to make field hospitals as close to the brick-and-mortar version as possible.

“These are state-of-the art mechanical and electrical systems,” Waddell says. “They have the full nurse call and they have all the accoutrements that would be required to properly house a patient bay … They’re extremely safe.”

The parking-lot field hospitals, which can be built in as little as two weeks, have anywhere from 40 to 93 beds and are connected to the hospital by covered walkways. Waddell says the temporary buildings can safely power machines for oxygen, tracking vitals and adjusting lighting for the patients’ rooms, and the field hospitals have their own heating, cooling, air filtration and permanent plumbing for washrooms and showers.

Images of the field hospitals across Ontario show ultrasound areas, computer bays and kitchenettes, as well as patient cubicles with whiteboards and power outlets. In Barrie, Ont., hospital-wide intercom, needle collection sites, file charts, and paper towel and glove dispensers are built in to the set up.

Initially intended to be in use for just a few months, the fixtures now have a longer life span.

“(In Ottawa, they had) permanent washrooms built right into the facility,” says Waddell. “So in all of them now, we’ve gone back to remove the temporary washroom facility and put permanent ones.”

Waddell says the insulation is warm enough for Canadian winters and the aluminum is rustproof. The company that makes the structures, Sprung Structures, touts the durability of the stretched PVC membrane walls.

The field hospitals are now designed to be used for about two years, though Waddell says much of what BLT built for the Ontario field hospitals could be packed up and reassembled at a hospital elsewhere in the future.