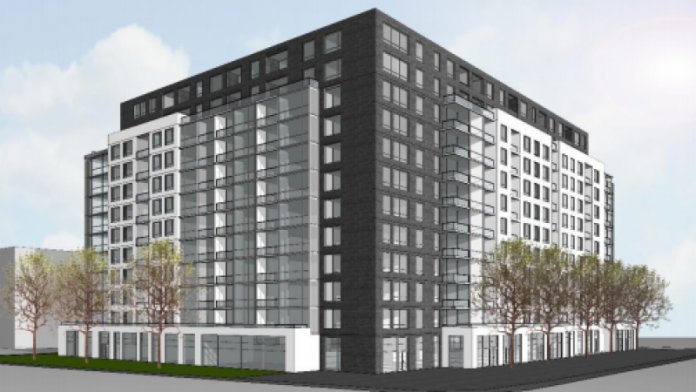 The owners of a long-established shopping mall in south-central Ottawa plan a significant redevelopment by adding two new structures to the site, including seven-storey residential building and a 12-storey mixed use building.

The existing 22,000 sq. ft. Merivale Mall at 1642 Merivale Rd. was originally constructed in 1976, on a street comprised largely of low-density (and rise) strip retail developments.

Owner First Capital says in documents submitted to Ottawa’s planning department that is looking at a “wide range of potential future development plans” for the site. 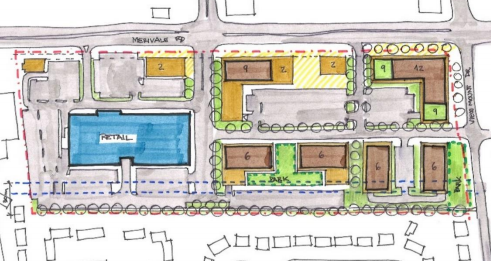 The application includes a sketch of one “potential build-out scenario” that would replace the existing shopping mall with a number of smaller mixed-use buildings and a retail component that appears to be less than half the size of the current plaza.

However, First Capital’s vice-president of development for Eastern Canada, Luc Fortin, told Ottawa Business Journal that the sketch represents just one possibility for how the site could look in the future. He was quoted as saying that the company remains focused on retaining its current retail tenants and constructing the 12- and seven-storey buildings.

In the first phase, First Capital proposes  to relocate the Harvey’s drive-through restaurant from the corner of Merivale Road and Viewmount Drive to the northeast corner of the property and replace it with the 12-storey highrise. This structure exceeds current height limits and would need a zoning amendment from city council.

The L-shaped 12-storey tower would feature about 15,000 sq. ft. of commercial space on a ground-floor podium facing Merivale Road, with roughly 270 one- and two-bedroom residential units on the floors above, OBJ reported.

There would be 55 surface-level parking spots and another 316 spaces in an underground lot.

Fortin said First Capital should have a clearer idea of the project’s timeline later this year, adding the company will look for a partner with expertise in residential development closer to the start of construction, the published report says.

The city planning documents do not provide an estimate of the proposed development’s cost or how and when contractors will be selected to work on the project.