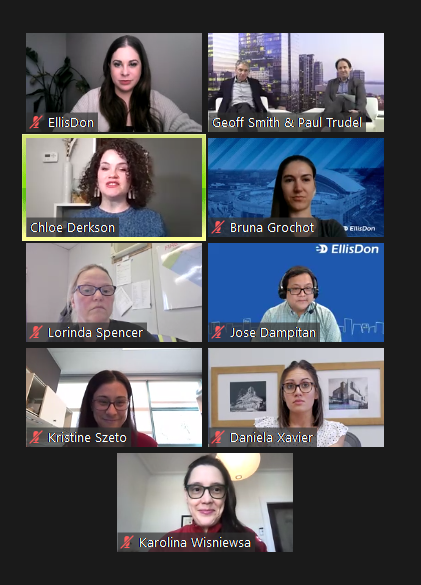 Breaking the Bias was the theme of this year’s International Women’s Day celebration presented virtually by EllisDon 2gether, the company’s gender equity group.

It was an opportunity to showcase women working in the industry, share experiences and ideas to improve working conditions, attract more women to construction and to leadership roles in all areas of the industry.

While he acknowledges that positive change has been happening for women in the industry, EllisDon CEO Geoff Smith admits improvements have been slow been and difficult.

When asked to describe one example of an injustice towards women that he has witnessed on the job, Smith talked about the historic challenges women have faced in construction.

“There isn’t one thing that leaps out at me, there are about a thousand,” he said, remembering the state of the industry when he started his first construction job – a time that derogatory comments, sexist jokes and images were not just acceptable, they were the norm on worksites.

“It was just the way it was,” he said. “I was actually part of the problem . . . because I did nothing about it and by doing nothing, I endorsed it.”

At EllisDon, breaking the bias means keeping the conversation going, listening to and encouraging women.

“I really, really believe that all of us want to do the right thing,” Smith said, “but I think it is very easy to fall back into old habits.”

That subconscious and historic bias still exists and leaves women behind in construction – because when two people are competing for a promotion and they are equally qualified, Smith said

That’s the reality that his company is working to change.

Lorinda Spencer joined EllisDon as a safety coordinator seven years ago and in 2019 she became an assistant superintendent working on the Oakridge Centre worksite in B.C.

In her presentation, Spencer recognized the long history of women in construction and how it “opened doors for us.”

Across Canada, women currently make up just 13 per cent of the total construction workforce.

Spencer said she is encouraged that the environment is changing and she believes women could be the solution to the labour shortage and aging workforce issues impacting the construction industry today.

“We’ve come such a long way,” she said. “All of our blood, sweat and tears will make it easier for women entering the industry in the future.”