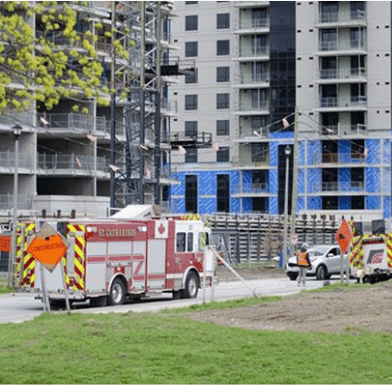 Two Ontario companies and two individuals have been fined a total of $380,000 after pleading guilty to Occupational Health and Safety Act violations relating to two workers critically injured after falling down an elevator shaft on a construction site.

Court documents stated Reimar supervisor Jose Martinho had assigned two workers to move and install formwork for the inner walls of the building’s elevator shaft from the 8th to the 9th floor and to install a platform in the elevator shaft to do the job.

A crane operator assisted to install and level the platform which was supported by beams that rested in pockets formed into the concrete elevator walls.  But the workers struggled to align all the beams into their respective pockets, the court decision explained.

However, according to a ministry of labour invstigation,  Martinho decided to install an additional bracket under one end of the support beams, because of concerns about “the amount of bearing in that pocket”.

“No engineering approval was obtained for the installation of the bracket, and the heads of the anchors that attached the bracket to the concrete, which did not fail, were too small for the opening in the bracket,” the ministry stated.

The platform was installed, levelled, and approximately 5,420-kilogram section of formwork was placed on top. The two workers also stepped onto the platform and began working.

“The platform collapsed at one end, causing the workers to fall and become critically injured,” the Ministry reported.

Section 89(2) of the Construction Regulation states the formwork and falsework, including the elevator platform, should have been designed by an engineer and performed in accordance with design drawings.

“Reimar was responsible for and did not obtain and provide site-specific drawings prepared by a professional engineer for the elevator shaft platform for the tower,” according to the ministry.Homestead Land Holdings failed to meet its responsibilities as a constructor.  Reimar Construction failed to meet its responsibilities as an employer. Martinho and Martins both failed in their duties as a supervisor and a director.