Toronto city council voted Thursday to ask the Ontario government to pause Bill 23, a new sweeping housing construction bill, until the end of January and to consult with municipalities about the potential impact. 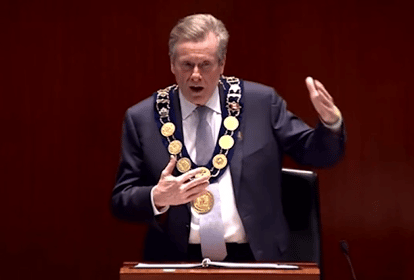 According to a staff report, Toronto would lose about $230 million a year in development charges, community benefits charges and parkland levies if the bill is passed, a financial hit that Mayor John Tory says the city can’t afford to lose.

“They’re taking money that otherwise would have come to us to pay for growth, and leaving it in the hands of the developers and leaving us with the bill for all of the infrastructure and other things that have to be done to facilitate growth and build complete strong communities. That’s what’s going on here,” Tory said.

According to the Ontario government, the bill will help build 1.5 million homes over the next 10 years.

“Our government is following through on our commitment to Ontarians by cutting delays and red tape to get more homes built faster,” Steve Clark, Ontario minister of municipal affairs and housing, said in a news release.

The bill has not yet passed third reading in the Ontario legislature.

The city staff report on the issue says: “There is nothing in the bill compelling a developer to advance an approval to construction or to pass forward any cost savings to consumers; developers sell housing at the price that the market will bear.

“This significant potential revenue loss comes at a time when Toronto has real challenges with an anticipated $815 million budget shortfall as a result of the COVID-19 pandemic and significant project cost escalation, as reported previously to City Council in May 2022,” the report states. “These challenges also come at a time with no additional capacity to issue debt, and when our residents are struggling with higher inflation and borrowing costs.

”The revenue loss would dramatically impact Toronto’s finances and would be unaffordable for existing taxpayers to fully fund.”

Councillor Brad Bradford said the bill reduces the city’s ability to be sustainable.

“As the regulations stand today, we can’t support them. We do want to build more housing. In fact, this council is laser focused on that,” Bradford said.

“But what’s been put on the table today kneecaps this city, kneecaps future generations, and it limits our ability to deliver the affordable housing that will be absolutely needed for our future success and prosperity as a city.”