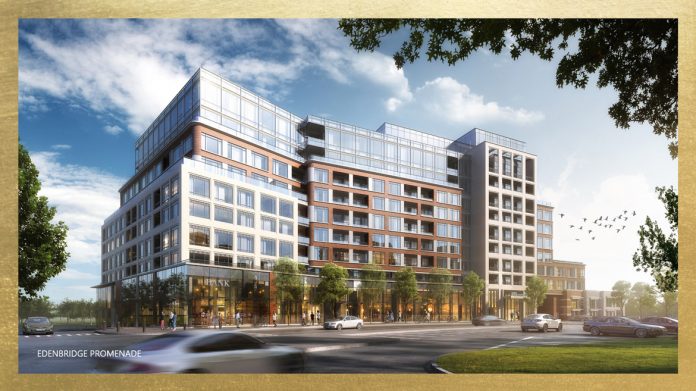 New details have been released about Tridel and First Capital Realty’s Edenbridge on the Kingsway multi-phase, mixed-use redevelopment of the Humbertown Shopping Centre in Etobicoke. The planned building, which is the first phase, was designed by Kirkor Architects and will include 183 suites and 24 townhomes, Urban Toronto reports.

The redevelopment will eventually replace and build out the mall property to include residential, office and public spaces while it retains and expands the existing retail on the site.

Databid.com reports the scope of work includes the five block redevelopment of the current site including commercial uses on the ground floor and second floor of five buildings, three residential buildings with 604 residential units including 28 townhouse units. These residential structures would range from three storeys (townhouses) to 12 storeys with ground and second floor commercial usage and a fifth three-storey building containing 28 townhouses.

Overall there will be 25,300 sq. ft. of retail space and 57,100 sq. ft. of residential space. The exiting shopping centre on the site will be demolished. The developers haven’t announced the project’s dollar value.

The building will feature the several amenities including a grand lobby, english garden, gym with coffered ceiling and an indoor pool and hot tub. Other features include a party room with a dining area and what is described as a “rooftop amenity terrace with seating, dining and grilling spaces and greenery.”

Urban Toronto says additional details about suite layouts and finishes are expected to be announced in the near future. These suites are targeting a tentative occupancy in 2023 and include parking for suites over $1 million. The building’s interiors will be designed by II By IV Design and the landscape architecture by Forrec.

According to Edenbridge-condo, Edenbridge on the Kingsway is just three minutes from the Royal York Station. Traveling to downtown via transit is just 30 minutes away. It is in walking distance from Humbertown with close access to big box stores such as IKEA, Walmart, Loblaws, Best Buy and Home Depot.

Humber College’s Lakeshore Campus is less than 15 minutes away and has more than 10,600 enrolled students.

DataBid is currently reporting on this project – Multi-Phase Edenbridge on the Kingsway Redevelopment  (0027021513).