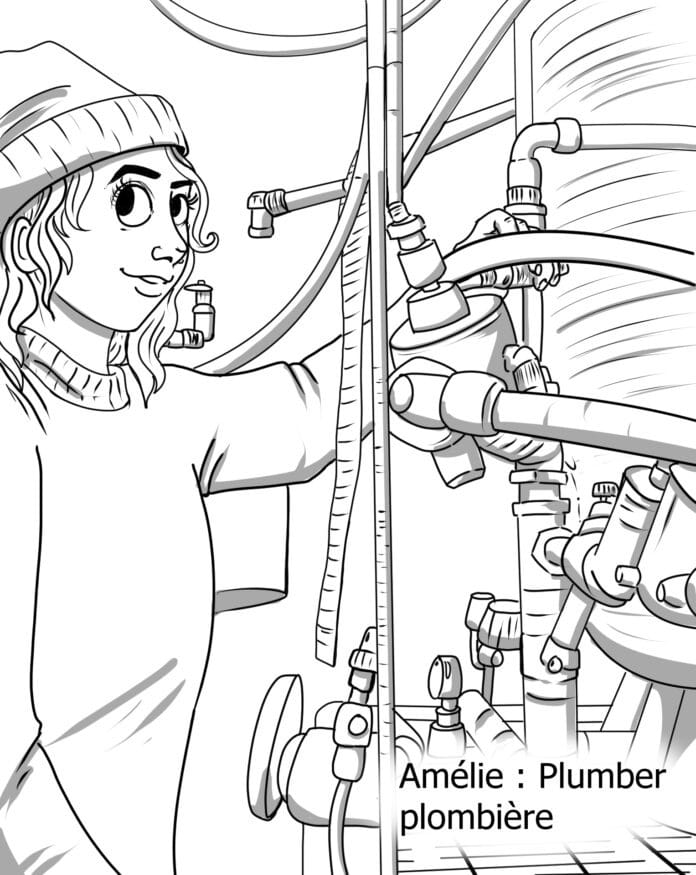 A New Brunswick non-profit is creating colouring books highlighting tradeswomen, while showing kids there’s no such thing as a gendered career.

Two editions of the Tradeswomen of New Brunswick colouring books have been published by New Boots: Progressing Women in Trades, part of the non-profit MAP Strategic Workforce Services.

New Boots is a provincial network and resource hub that aims to promote, support and mentor women in non-traditional skilled trades sectors such as: construction, maintenance, manufacturing, automotive, transport and forestry. There are more than 400 members in the network, students, apprentices and journeypersons.

“We were trying to create an activity around promoting skilled trades careers to young girls and boys and we decided on colouring books because both girls and boys like to colour and it can start a conversation,” said Hélène Savoie-Louis. “We wanted to show actual tradeswomen from our province as mentors to the next generation in a fun activity.

“Our goal is to promote that there is no gender to a career path.”

The initiative is aimed at young children, particularly girls, so they can see themselves represented in skilled trades and open their minds to the possibilities they hadn’t considered.”

Tradeswomen are invited to send a picture of themselves at work and illustrator Melanie Blighe, reproduces images into like-life cartoon versions of them.

The first book sold out in just one week.

“There was never a plan for a second edition, but since the first one was so popular we had many requests form our New Boots network members that wanted to take part in another edition,” Savoie-Louis said.

Savoie-Louis said one of the goals of the book is to reach kids when they’re starting to learn about traditional gender roles.

“So, the goal of the book is that young kids see no gender to a career path, because there isn’t a gendered career.”

In the past five years, the number of women in trades in New Brunswick increased by one per cent, which she said is significant.

New Boots promotes trades to women and now also focuses on keeping them in the careers, growing the representation of women in the field and educating employers on the issues women face.

“The tradeswomen who are part of the colouring book love seeing themselves and sharing their story. The employers have supported them by buying the colouring book and sharing with their teams. Teachers and parents have loved it as well as it allows them to share success stories of trades that have often only been promoted to young boys. It shows the quality of the tradeswomen from our network and our province.”