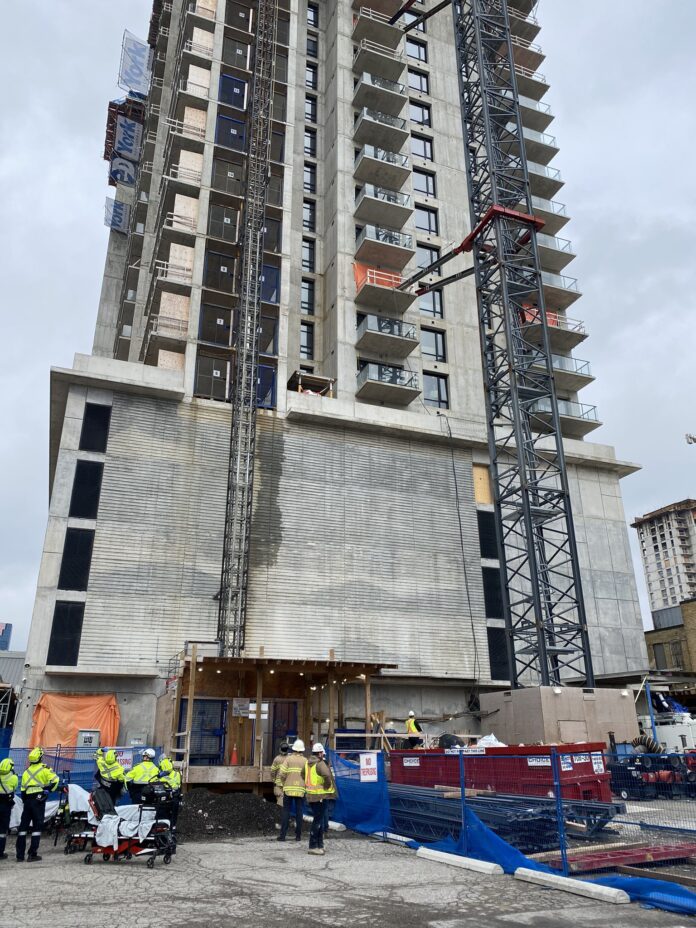 The provincial Ministry of Labour is investigating after four people were injured in a partial floor collapse at a building under construction in London last Thursday.

According to London’s fire chief, the incident happened during a cement pour on the 25th floor of a residential high-rise under construction.

All four construction workers were injured at the 131 King St. worksite when the floor collapsed. They were taken to hospital with non-life-threatening injuries, the fire department reported.

The project, a 31-storey tower expected to be completed this year is being built by York Developments.

In a statement, the builder said the partial floor collapse occurred during a concrete pour by the subcontractor on the site.

“We are thankful that no serious injuries have been reported and we are now in the process of gathering further information. Worker and public safety are at the core of our business, and we will be conducting an internal review alongside EllisDon to ensure compliance with our mandated safety protocols.”

While workers were pouring the concrete and shoring up the ceiling that would become the 26th floor above, some of the material let go and the workers were caught under the debris, platoon chief Gary Mosburger told reporters.

The issue for firefighters was getting to the injured. The construction elevator took them to the 19th floor and the injured worker had to be carried down to the elevator.

“There was a lot of muscle power that needed to go into bringing these individuals down safely so they can get out,” Mosburger told the London Free Press.

“They were certainly instrumental in helping us get access and finding out what the hazards were on site during the height of the incident and able to bring it to a very positive conclusion.,” the chief said.