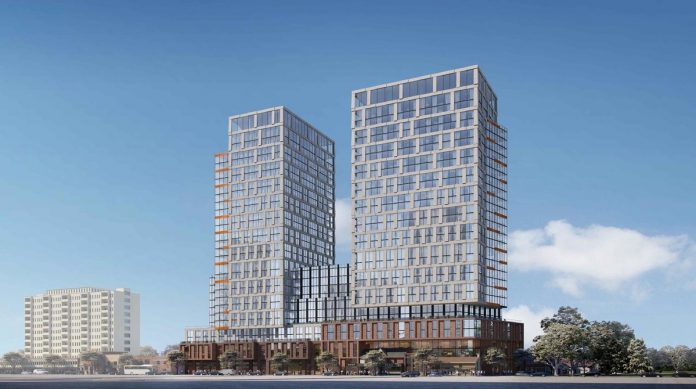 Weston Asset Management Inc. has submitted a development application for a pair of condo towers at 1956 Weston Rd. in Toronto. The 29 storey towers will rise up to 99 metres in height from a shared base, DataBid.com reports, citing Urban Toronto. However, some neighbours aren’t happy with the way the project is taking shape.

Graziani + Corazza Architects designed the twin towers with a gross floor area of 61,316 sq. m., including 4,611 sq. m. of ground floor retail space and second floors fronting Weston Road. There will be 592 one, two and three-bedroom condos, 596 sq. m. of residential amenities at the rear of the ground floor, and a 345 sq. m. of additional amenities on the 13th floor.

This project will replace the existing Greenland Farm Supermarket and surface parking lot but will retain a pair of heritage frontages at 1974-1976 and 1982-1986 Weston Rd., the developers say. Even though the proposal site includes four heritage buildings dating between 1851 and 1920, only two of these frontages will be retained and will be part of the site’s retail frontage.

Roy Murray’s blog posting also suggests that some neighbours in the area aren’t happy with the proposal, which has doubled the podium size from the original six-storey proposal outlined at an August, 2017community meeting.

“Based the recent Official Plan amendment and rezoning proposal, the community must have voiced its overwhelming support for the tallest and most crass development that could be squeezed onto the site,” Murray wrote sarcastically.

“I’m guessing the community said, ‘Please destroy any remaining main street feeling on Weston Road and put up a hugely out of scale development that will overwhelm everything in the area and lead to further eyesores’.”

“As with other developments in the past, outrageous proposals lead to slightly less outrageous proposals. The project if built could add more than 2,000 people to the already busy Weston and Lawrence intersection. Let’s not even think about the additional load placed on our inadequate sewage system (you can be sure nobody else will).

“The attitude in City Hall seems to be, “It’s Weston, they should be grateful for any development. In most Toronto neighbourhoods, 12 storeys is a huge building. Here it’s merely a base.”