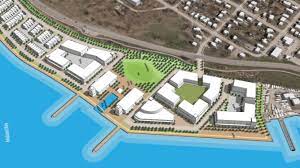 With a 120-day exclusivity period in place due to a land purchase, Midland Bay Landing Development Corporation (MBLDC) has updated the status of a waterfront development in the Town of Midland.

“As you may know, we are currently in a 120-day exclusivity period with the Barrie-based developer, Georgian Communities,” MBLDC chair Bill Kernohan said in a statement. “Following successful completion of this period, council will review the recommendation of the Midland Bay Landing Board on the sale of Phase 1.”

The land was previously an industrial site with contaminated soil.

The developer is proposing a mixture of residential types and sizes through the phases with the initial phase being townhomes.

Public access to the entire waterfront along the water’s edge is a signature public feature of the development plan, along with a separate, parallel multi-use trail for cycling or running.

Ten Acres of the site, 25 per cent of the total development,  will be dedicated to new publicly accessible space for new parks, and public plazas to be built by the developer at no cost to the town. All public areas will be on property owned by the Town.

Previous public consultations identified the importance of public access to the water, and MBLDC says the demand has been preserved. More public feedback on the proposed design elements will occur after the sale of the Phase 1 lands.

Georgian Communities was awarded a contract that started a 120-day exclusivity period and when approved by council, sale of the Phase 1 land to the developer.

MBL will transform an unused, contaminated site on the waterfront into a mixed-use community that will benefit the town and the region with its publicly accessible waterfront, open spaces, new parks, and a public square for the enjoyment of residents and visitors alike. Not only will this benefit our current businesses and residents, but it is expected to attract new businesses and residents to Midland.

What about the town’s initial cost to purchase the property?

Land is sold and will benefit from additional revenue when the Phase 2 lands are sold.

Phase 1 at the east side of the site is approximately 36 per cent of the entire site and work will include expansion of the promenade, park space and construction of low-rise townhomes that are limited to three-storeys in height.

Phase 2 includes a large park space and a public plaza connecting to the waterfront promenade along with residential and commercial space.