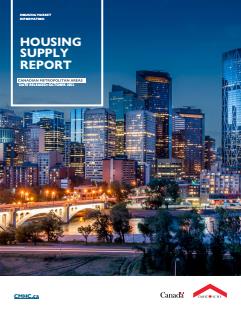 After a boom in 2021, housing starts in Canada’s six largest census metropolitan areas (CMAs) fell 5 per cent in the first half of 2022. A nine per cent decrease in apartment construction is the main cause of this drop, according to the latest edition of Canada Mortgage and Housing Corporation’s (CMHC) Housing Supply Report.

“In the first half of 2022, housing starts were mixed across Canada’s largest urban centres. Rental construction was generally resilient, due to strong demand for this type of housing, while developers took a more cautious approach to starting new condominium apartment projects, due to the higher interest-rate environment,” said Francis Cortellino and Eric Bond, Senior Specialists for housing market analysis for CMHC. “Increases in construction costs and materials shortages were also felt across markets, impacting construction times and the affordability of the housing delivered.”

Highlights from this year’s report: