Duchesnay Creek Bridge on Highway 17B at Nipissing First Nation near North Bay has been awarded the Northern Ontario Excellence Award for Wood Design from Wood WORKS! Ontario.

Built through a limited partnership of Nipissing First Nation and Miller Paving, the $17 million project provided economic and training opportunities for the community, embraced the enhanced use of timber, and respected the bridge’s historical origins. 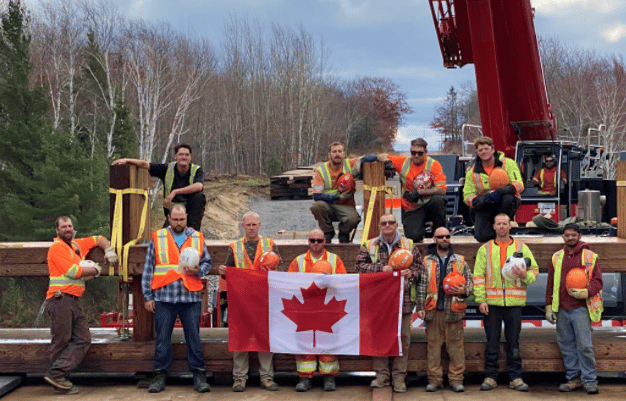 Nipissing-Timiskaming Assemblyman Anthony Rota presented the award to Chief Scott McLeod and department of transportation officials Matt Curry and Anthony Akomah at the Elders’ Hall of the Union of Ontario Indians in North Bay.

The Duchesnay Creek Bridge connects the City of North Bay and the Nipissing First Nation. It was constructed in 1937 and replaced last year with a one-of-a-kind structure, built using laminated, high-quality Douglas Fir girders.

Wood WORKS! is a national program of the Canadian Wood Council that promotes the use of wood in the construction sector and in the design community. The award program recognizes innovative people and organizations involved in the advancement of wood for all types of construction. 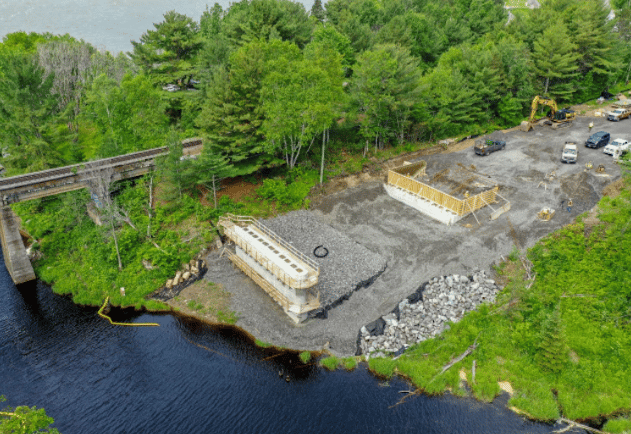 The $12 million bridge replaced older span that was closed in January 2019 due to structural concerns and the new 83-meter structure features a timber main span – the only one of its kind in Ontario. It’s a unique feature that pays tribute to the original structure. The bridge also includes a three-span glued laminated timber girder bridge with curved glued laminated timber struts on the piers.

“The replacement of the Duchesnay Creek Bridge is an excellent example of innovative engineering and environmental commitment, using renewable timber for bridge construction and respecting historical, cultural and architectural considerations

Importance of the existing structure,” Rota said in a statement.

The high-visibility project helped promote the use of mass timber in highway bridges across Canada. By building with wood, this project will result in a total carbon benefit of 991 metric tonnes of CO2, which is equivalent to taking over 190 cars off the road for a full year.  According to WoodWorks! Officials, there is a significant shift happening in the construction industry.

“New products and technologies, progressive regulations and a greater focus on reducing the carbon footprint of the built environment have led to a resurgence in timber construction,” said Steven Street, executive director of Wood WORKS! program in Ontario.

“Despite this, wooden bridges are still rare, that’s the way it is. It’s exciting to have the opportunity to celebrate culturally and architecturally significant projects like the Duchesnay Creek Bridge.”