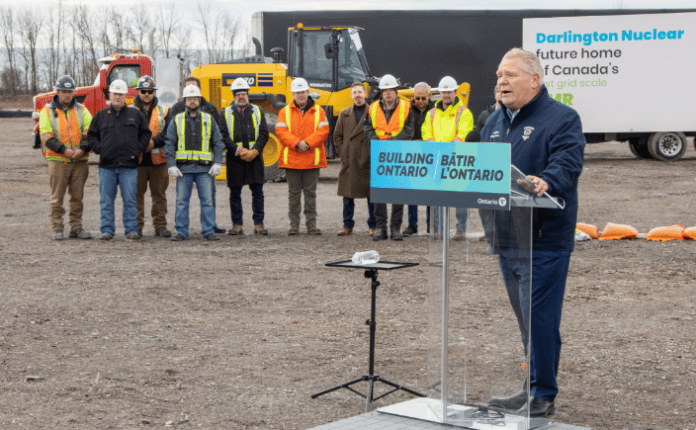 OPG has started site preparation activities and submitted a Licence to Construct application for the SMR project at the Darlington site.

The project’s preliminary schedule is to complete construction of the reactor by 2028 and the 300 MW SMR could power about 300,000 homes with low-carbon, reliable power.

“With global businesses looking to expand in jurisdictions with clean and cost-effective electricity, Small Modular Reactors will help compete for and attract more game-changing investments in Ontario’s economy,” Premier Doug Ford at an event at the site.

“Our government is getting it done and building the future of nuclear energy right here in Ontario to support the needs of our growing province.”

OPG has submitted a Licence to Construct application to the Canadian Nuclear Safety Commission (CNSC) – the next step in the regulatory process to build a new nuclear reactor and is required before any nuclear construction can begin. The licence application was developed collaboratively between OPG and GE Hitachi Nuclear Energy, designer of the BWRX-300 SMR.

This application process will include opportunities for Indigenous Nations and Communities, and the public to participate through public engagement activities such as information sessions, workshops, and public hearings. To learn more about the CNSC licensing process, public hearings, and participant funding program, visit the CNSC’s webpage.

Also, a low-interest loan of $970 million has been approved by the Canada Infrastructure Bank.

Once completed, this project could pave the way for additional SMRs at the Darlington site, in Ontario, and around the world. Recently, OPG and Czech Republic-based ČEZ signed a Memorandum of Understanding to collaborate in the advancement and deployment of nuclear technology, including SMRs, to safely produce clean, reliable electricity.

Across Canada, nuclear energy helps avoid 80 million tonnes of carbon emissions per year, or the equivalent of removing 15 million cars from the road.