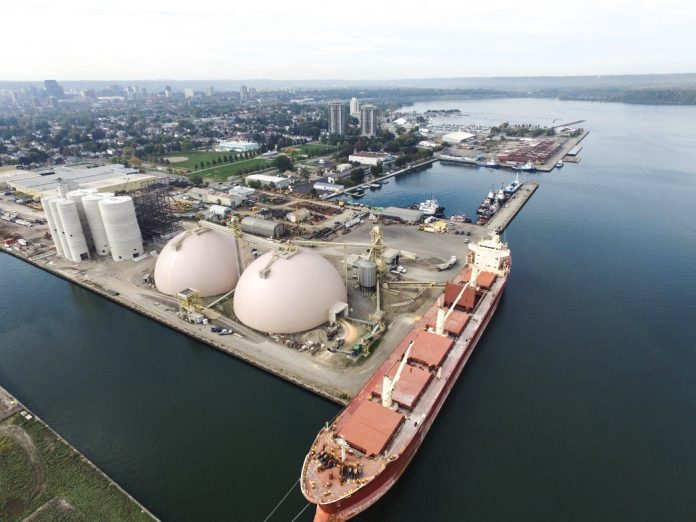 An investment of $5.5 million from the federal government means that the Port of Hamilton can embark on an expansion project.

The Hamilton-Oshawa Port Authority (HOPA) wants to turn Pier 10 into a dedicated agri-food cluster, and to do that it needs to update the pier’s marine infrastructure to better support the flow of trade. In particular, the port needs to address issues such as a lack of berthage along the Wellington Street slip and a lack of covered storage for dry bulk products.

For the port, it makes sense to create a single-focus for the pier as there has already been significant private investment there. Parrish & Heimbecker and Sucro Sourcing, for example, have spent approximately $150 million at Pier 10 to build a new grain terminal, flour mill (P&H), and sugar refinery and crystallization facility.

As an industry, agri-food is of growing importance to the Hamilton area. Currently, it is a $1 billion industry in the city, and in 2018 the Port of Hamilton saw a 63% increase in international exports. The Pier 10 Export Expansion will enable further grain handling capacity, increased domestic processing of raw sugar (for re-export in turn), and improved goods fluidity.

“The infrastructure investments we have made to support agri-food businesses on the port lands continue to drive new opportunities for export and economic growth,” said HOPA president and CEO Ian Hamilton.

“We’re proud to help our customers increase their onsite capabilities, enhance export capacity, and decrease local truck traffic. This is good news for our port customers, the environment and the surrounding community.”

Expanding the pier will involve relocating the Soletanche Bachy Canada (formerly Bermingham Foundations—a pile driving manufacturer) to a different location within the port. Then the pier will be ready for two major construction projects: rebuilding Pier 10’s east dock wall (which was originally constructed in the early 1900s) and dredging the Wellington slip alongside it to accommodate berthing seaway vessels, and constructing a covered storage facility to house raw sugar, grains and other dry bulk products, reducing truck trips from offsite locations.

“Increasing the ability to receive more vessels and expanding our capacity at Pier 10 is the answer to getting more of our grain products to market faster. With this investment, we can continue to grow both our grain export business, and domestic milling business in partnership with Canadian farmers,” says Bruce MacIntyre, president and COO of Parrish & Heimbecker.

The $5.5 million investment, announced on August 21, comes from National Trade Corridors Fund (NTCF) on behalf of Transport Canada. The total cost for the expansion and redevelopment of Pier 10 is $16 million.