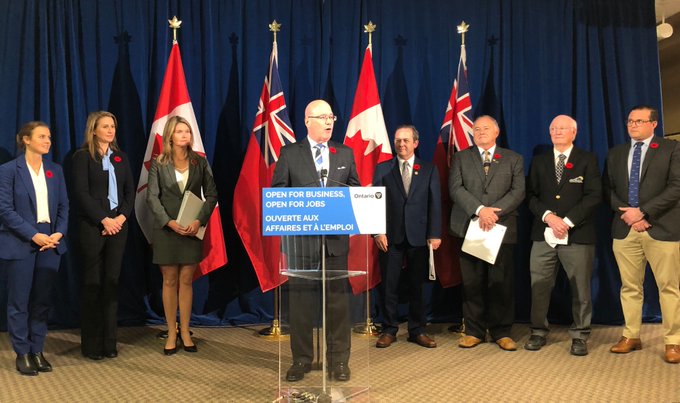 Ontario has committed to cutting red tape around zoning laws to free up acres of vacant and valuable industrial land in Oro-Medonte.

“I’m pleased to announce to all of you today that I’ve signed a Minister’s zoning order to allow those lands to be used for automotive employment uses,” said Steve Clark, minister of municipal affairs and housing. “We are committed to cutting red tape and making it easier to build job-creating projects.”

Unlocking the land will open the door for a proposed Automotive Innovation Park with about 700,000-sq. ft. of building space for the automotive sector located within the Lake Simcoe Regional Airport Economic Employment District, land that was previously only permitted for airport employment.

“It’s something that we’ve been waiting to have happen for over a decade.” Oro-Medonte Mayor Harry Hughes says it’s been a long time coming and will help the local economy in a big way.

“(They took) away a stipulation that really narrowed the type of use that could go on this land – even though it was employment land – to make it broader,” he explained. “It’s a big, big deal.”

The proposed facility will be developed by Oakleigh and managing partner Geoffrey Campbell says it will create more than 1,800 construction jobs and 700 full-time jobs. Once complete, the Automotive Innovation Park could house a motor sport track for private and commercial use, as well as for training and research.

The indoor part of the complex could house a conference centre and automotive museum, as well as facilities for studying and testing automotive products and technologies.

Officials say there are months of planning ahead with shovels expected to be in the ground by spring. Construction will be completed in phases, with the anticipated opening date in late 2021.

The total investment for the project is $200 million and it is estimated to bring $105 million into the local economy annually. The county, the township, neighbouring airport and Georgian College support the project.

“As the future majority shareholder in the neighbouring Lake Simcoe Regional Airport, this development will also complement and help to maximize the significance of this area as a budding economic development district,” said George Cornell, County of Simcoe Warden.

The site is within the Lake Simcoe Regional Airport Economic Employment District as set out in the Growth Plan for the Greater Golden Horseshoe.

The Planning Act authorizes the Minister of Municipal Affairs and Housing to make zoning orders for regulating the use of land and the location, use, height, size and spacing of buildings and structures. This zoning order was made at the request of Simcoe County and the Township of Oro-Medonte so the land can be used for automotive-related employment.

“The Minister’s Zoning Order is an example of the Government of Ontario living up to its commitment to reduce red tape in order to create jobs and bolster economic development,” said Mayor Hughes said. “This prompt and co-operative measure will permit development that has been stalled for many years to move forward creating new jobs.”