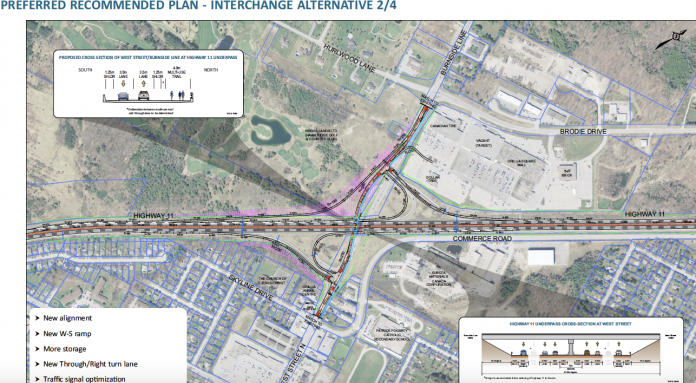 The province has rejected the City of Orillia’s funding request for concrete barriers on a bridge to be built over Highway 11 at West Street.

Earlier this summer, council petitioned the provincial Ministry of Transportation (MTO) to install cement barriers on the new bridge, which will include a multi-purpose trail designed for walking and cycling.

Council argued that the barrier was required for safety; to keep vehicular traffic separated from pedestrian traffic. Since the walkway will be just two-metres wide on the bridge, councillors said pedestrians have “nowhere to go but to jump off the bridge” if there’s a problem.

However, the MTO does not agree.

“With regards to a barrier between the bike lanes and the sidewalk on the north side of the West Street structure, the Ministry would not be in favour of this addition,” said a recent letter to council from James Dowell, the senior project manager overseeing the initiative.

“It is not (MTO) practice to separate sidewalks from the through traffic on a bridge by a barrier,” he said.

Dowell’s letter said there is typically a 1.5-metre shoulder between the edge of the driving lane and the sidewalk for this type of structure.

“This is in keeping with the Canadian Highway Bridge Design Code and the MTO Structure Manual and Bridge Office Design Bulletins and/or Guidelines,” said Dowell.

“We would also like to point out that even though the bike lanes are provided on both sides of the bridge, some cyclists will still use the sidewalk. For this reason, the design includes a higher railing on both parapet walls to ensure safety of cyclists.”

Dowell said if the city wishes to include a barrier, “the city will be asked to pay all additional costs associated with the inclusion of the barrier. The cost would include the wider bridge, barrier walls and end treatments.”

He also warned that the ministry is under “tight time constraints” to meet their deadline of 2020 for the completion of the detailed design.

The objectives of the study include:

The new bridge will be moved slightly to the south to allow the existing bridge to be used during construction and plans include improvements to the existing southbound off ramp and add a new ramp in the south west quadrant to improve the operation of the west ramp terminal and facilitate direct access onto the highway for trucks hauling aggregate out of Severn Township. Currently, those trucks enter Highway 11 south with a left turn.

A multi-use trail is proposed to be built on the north side of the new bridge. To help improve safety for pedestrians and cyclists, the intersections at ramp terminals will be 90 degrees to reduce traffic speed and the crossings will occur at signalized intersections.

The current structure is about 50 years old and has been struck multiple times by southbound traffic. It is deteriorating “more quickly than expected.” Construction on the new bridge is expected in 2021.