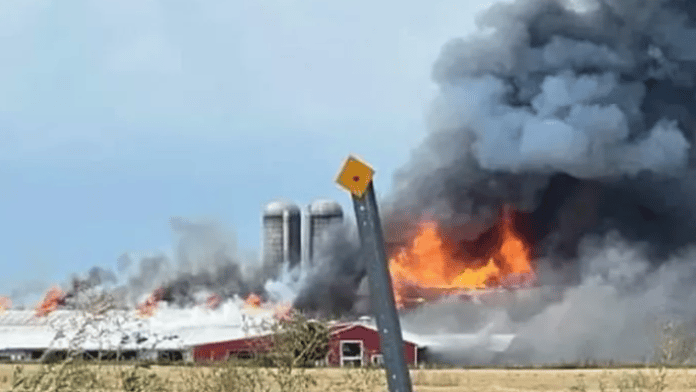 A Simcoe County farmer is vowing to rebuild after a devastating fire destroyed barns, a milk parlour and part of their cattle herd on Aug. 7. Multiple farm buildings were damaged, including a large 300- to 400-foot-long, interconnected barn structure, and a shed that was storing straw and equipment.

Damage at the Essa Township Farm, located south of Barrie, is estimated at between $5 million and $6 million and a GoFundMe page has been set up to support the Kloosterman family.

“They will rebuild, but there is a very long road ahead. The estimate is it may take up to two years to rebuild before the cows can return,” fundraiser organizer Paul Partridge wrote.

“This farm is well cared for and has been for four generations.” As flames and smoke filled the sky, the farm filled with fire trucks from four nearby stations.

Local farmers brought trailers to the site to evacuate 92 milk cows from the pasture. In the uncontrollable flames though, 50 young cows and calves still in the barn were tragically lost.

“Big or small, each will assist this family as they work to rebuild their farm,” Partridge wrote.