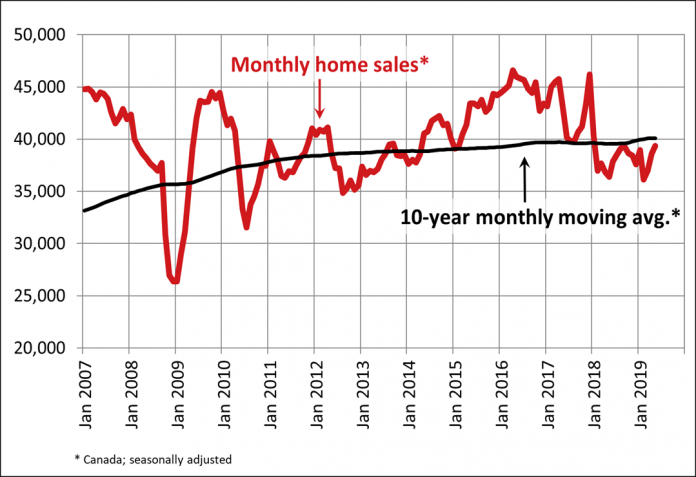 The Canadian Real Estate Association (CREA) says it now believes the resale housing market in Ontario will be better than originally expected for the latter half of 2019.

The association had previously projected a near-flat growth rate this year of .9% per cent, but has increased that to 3.9 per cent.

Nationally, many of the economic fundamentals that support housing activity remain strong outside of the Prairies as well as Newfoundland and Labrador. Following the release of CREA’s previous forecast in March, population and employment growth has remained strong and the unemployment rate has fallen further. Additionally, the Bank of Canada is widely expected to not raise interest rates over the rest of the year, the association says.

The 2019 federal budget also raised the maximum individual withdrawal limit under the Home Buyers’ Plan (HBP) from $25,000 to $35,000 and introduced the First Time Homebuyer Incentive, a shared equity program whereby the federal government finances a portion of a home purchase in exchange for an equity share in the home’s value. The increased HBP withdrawal limit took effect in late March, while the First Time Homebuyer Incentive is slated to launch in September.

These factors are expected to support to the beginnings of a recovery in home sales over the second half of 2019 after starting this year on a weak footing.

Nonetheless, the overall level of sales is expected to remain well below where it was in recent years, as successive policy changes – most notably the implementation of the B-20 stress test – continue to limit access to mortgage financing and dampen housing market sentiment. This is particularly the case in pricier areas where younger buyers have had little choice but to borrow more to get into the market.

National home sales are now projected to edge up 1.2 per cent to 463,000 units in 2019. CREA’s previous forecast estimated a decline of 1.6 per cent this year. This would still leave annual sales below the 10-year average and a far cry from the annual record set in 2016, when almost 540,000 homes traded hands. On a per capita basis, the forecast for 2019 would remain effectively tied with 2018 for the weakest year since 2001.

British Columbia is the only province expected to weigh materially on national figures in 2019, with a decline of 13.3 per cent compared to 2018, marking a small upward revision from the previously forecast decline of 14.9 per cent. Other revisions from the previous forecast for sales in 2019 were also upward, with Alberta moving from a 5.6 per cent decline to a 0.9 decline.

Quebec and New Brunswick are still forecast to see the biggest sales gains in percentage terms in 2019 (+7.7% and +10.6%, respectively), with both provinces on track to set new annual records. Sales in Saskatchewan and Newfoundland and Labrador are forecast to improve by almost 5 per cent, albeit from the lowest levels in more than a decade recorded last year. Meanwhile, activity in Manitoba and Nova Scotia is forecast to rise between 3.5 per cent and 4.5 per cent to near-record annual levels

The national average price is still projected to stabilize (-0.6%) at around $485,000 in 2019 following the 4.1% drop recorded in 2018, which was the largest in almost 25 years. This reflects a stark and growing split between Eastern and Western regions. In line with the balance between supply and demand across the country, average prices are forecast to fall in 2019 in British Columbia, Alberta, Saskatchewan, and rise in Ontario, Quebec and the Maritimes. The average price is also expected to fall for the fifth consecutive year in Newfoundland and Labrador.

That said, the big picture is that sales are expected to remain historically weak in British Columbia, Alberta, Saskatchewan and Newfoundland and Labrador, historically strong in Quebec, New Brunswick, Manitoba and Nova Scotia, and come in close to the 10-year average in Ontario.

The national average price is forecast to edge up by 0.9% to around $490,000 in 2020. Average price trends across Canada in 2020 are generally expected to be more moderate versions of those in 2019, with small declines in British Columbia, Alberta, Saskatchewan and Newfoundland and Labrador, and modest gains in all provinces from Manitoba through the Maritimes.