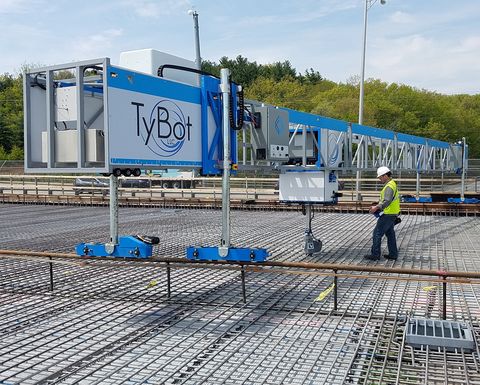 With the current labour shortage in construction, robotics could soon start filling the gap.

Construction workers can expect to spend more time on activities that machines are less capable of, such as managing people, applying expertise, and communicating with others.

While sectors such as retail and manufacturing have reinvented themselves, construction seems stuck in a time warp.

According to the McKinsey Report, global labour-productivity growth in construction has averaged only 1 percent a year over the past two decades, compared with an increase of 2.8 percent for the total world economy and 3.6 percent in manufacturing. 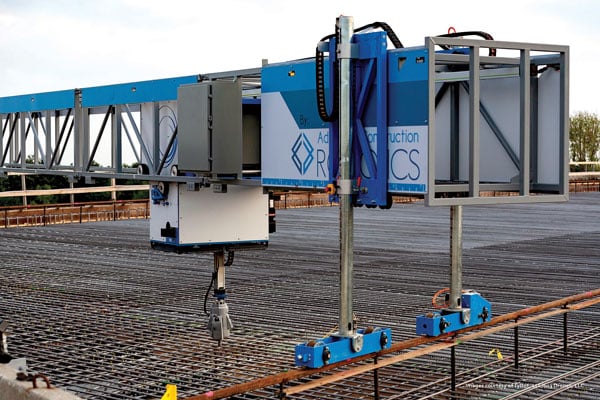 Significant gains are at stake. MGI’s research found that if construction productivity were to catch up with that of the total economy—and it can—the sector value-added would increase by an estimated $1.6 trillion, adding about two percent to the global economy. This gain is equivalent to about half of the world’s annual infrastructure need.

An example is the TyBot developed by Advanced Construction Robotics in Pittsburgh, Pennsylvania, which made its debut at the World of Concrete show in 2020.

Using computer vision, TyBot independently navigates bridge decks, identifies and ties rebar intersections, and then moves on to the next intersection, working at a pace of about 1,000 ties per hour. ACR compares that to the average 150-250 ties per hour one worker can produce – a hard, backbreaking task.

Once TyBot is set up on a job site, a technician gives it a few inputs through a small remote-control panel. Then, it goes to work ultimately autonomously, using robotics and artificial intelligence.

The TyBot is not remote-controlled, although a belly box console is used to communicate with and monitor the TyBot. There is no pre-programming and no running off design files. TyBot sees each rebar mat intersection to be tied.

“Our mission is to bring robots or artificial intelligence to the construction industry. We want to do that because the industry is short on labour, and there is a huge demand for infrastructure builds. The demand continues to grow,” explains Jeremy Searock, co-founder, president, and CTO at Advanced Construction Robotics. “We want to fill that labour gap with robots to ensure the world’s infrastructure can be completed when they want it complete.”

“Our TyBot can do the work of four to six people, and that frees up workers for other jobs. Plus, the robot can work three shifts because it doesn’t have to take a break,” adds Searock.

The TyBot offers the flexibility to do the work when needed, and you don’t have enough people for the job.

“On the flip side, if you have enough people, you can run your crew on one shift and run the robot on the next shifts and increase your overall output with the same amount of people.”

“In the end, when you add that up, you essentially increase the overall productivity of the operation,” says Searock.

The TyBot saves on direct costs, and more importantly, it allows the contractor to complete the job faster, saving on overhead.

Improved safety is also a factor. Not having people bent over all day saves workers from the wear and tear on their bodies from this type of work, and there is less chance of them slipping and falling on the site. And more importantly, throughout a career, working bent over all day has long-term effects on the worker’s overall skeletal health and risk of repetitive strain injuries.

Removing this work can improve safety on the site and the long-term health of the workers.

“We still need people to do construction work, but if you use robots in situations that are easy for robots to do, you can improve productivity and safety and put people in other jobs on the site where they can be best utilized,” explains Searock. “It makes sense when you look at the numbers. But as with any new technology and way of doing things, there is a transition period and a mindset change that robots are here to help, not take your job. They allow you to get your work done more efficiently and safely and allow your people to do other jobs on the worksite.”

With the current labour shortage, no one will lose their job. They are just going to get closer to getting the work done.

“I like to describe robots as the new tool of the trade. It’s the same progression we have done for years. From hands to hammers, from hammers to steam shovels. From steam shovels to excavators, from excavators to Robots. This progression has been happening for hundreds of years. Robotics is the new tool in the toolbox that will increase the industry’s overall productivity,” says Searock.

Advanced Construction Robotics has a new product called IronBot which will be coming onto the market next year.

“It’s the step before tying. It can carry the rebar bundles and place them at the right spacing,” explains Searock. “These combined technologies will take over most of this work, allowing the crew to move on to other aspects of the project requiring more skilled labour.”