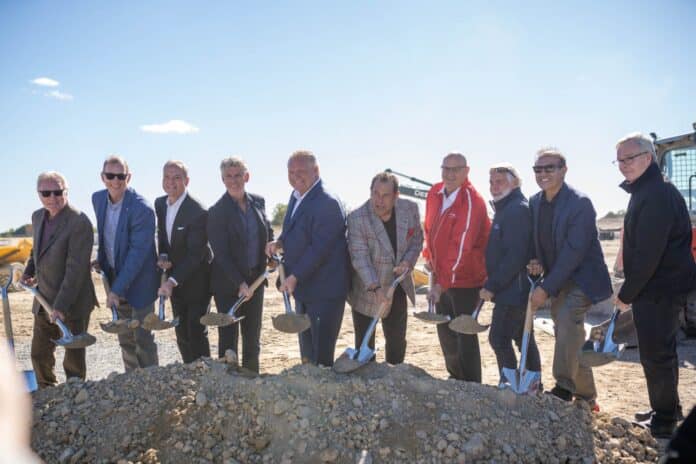 A ground-breaking last week launched construction on a new 233,000-sq. ft., multi-unit complex in Pickering. The development is a partnership between SmartCentres and Lastman’s Bad Boy.

The complex, expected to open in March 2023 is in Pickering’s innovation corridor and Bad Boy will be the largest occupant with 130,000 sq. ft. of the space.

“They never get credit,” he said. “Most importantly, I want to thank the construction guys out there, who are actually building this, they’re the champions, they’re the ones that make this happen.If it wasn’t for guys like that, we wouldn’t be able to build anything.”

About 50 construction jobs will be created by the project.

Blayne Lastman, chief executive officer (CEO) of Lastman’s Bad Boy, said the City of Pickering “made things that are sometimes so difficult, a whole lot easier. You understand business, you understand growth, you understand employment beyond our wildest dreams. To say the least, we cannot wait to move our headquarters to this beautiful city.”

Mitchell Goldhar, executive chair and CEO of SmartCentres, said partnering with Lastman’s Bad Boy is an important step,  “the first of many industrial buildings programs.

“We are very pleased to bring this facility and the 200-plus jobs to the City of Pickering and the province of Ontario,” Goldhar said.

“In addition to the more than 200 new jobs, construction values and economic spinoff, this landmark project will help attract even more industrial and commercial investment to Pickering and Durham Region. We’re only getting started!”