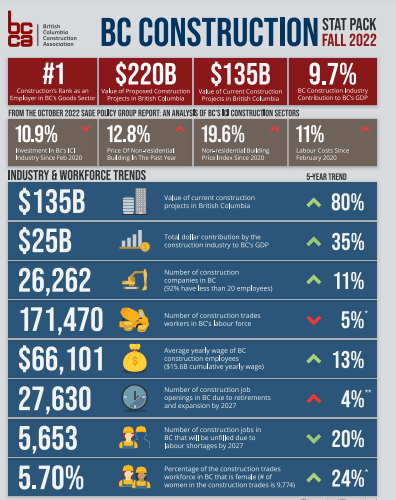 A new report paints a dark picture for construction contractors across British Columbia, as investment in the province’s industrial, commercial and institutional sectors drops 10.9 per cent since February 2020.

In addition, the non-residential building price index saw an increase of 19.6 per cent, , according to the BC Construction Association (BCCA).

The estimated value of current major construction projects underway in B.C. is $135.4 billion.

The BCCA Fall 2022 Industry Stat Pack, combined with findings from a new economic and policy report published Oct. 25 wars material and labour costs will continue “for the foreseeable future.”

The province’s construction industry accounts for $25.4 billion, or 9.7 per cent, of the province’s GDP, and the industry’s dollar value grew by 10 per cent as a result of rising prices, despite the lack of demand, the report says. Compared with five years ago, construction has seen an 80 per cent increase in project value.

However, this increase in project value is a false positive, Chris Atchison said in a statement.

Contractors are faced with rising cost and falling commercial demand, the report says.

The industry is reporting its lowest unemployment rate since 1976 at 5.7 per cent and wages have increased 11 per cent since last year, according to the report.

“We’re still waiting on prompt payment legislation, which is inexcusable at a time where we’re heading into a period of greater economic uncertainty in 2023. Lawmakers in British Columbia haven’t undertaken a measure to protect and provide some certainty for the contractors and for the skilled workforce that we are trying to attract and retain,” Atchison said.

In B.C. contractors wait up to 90 to 120 days to get paid, increasing their financial risk and the danger of bankruptcy.

While the number of industrial, commercial and institutional construction companies has increased, the number of tradespeople has decreased by five per cent over the last three years.