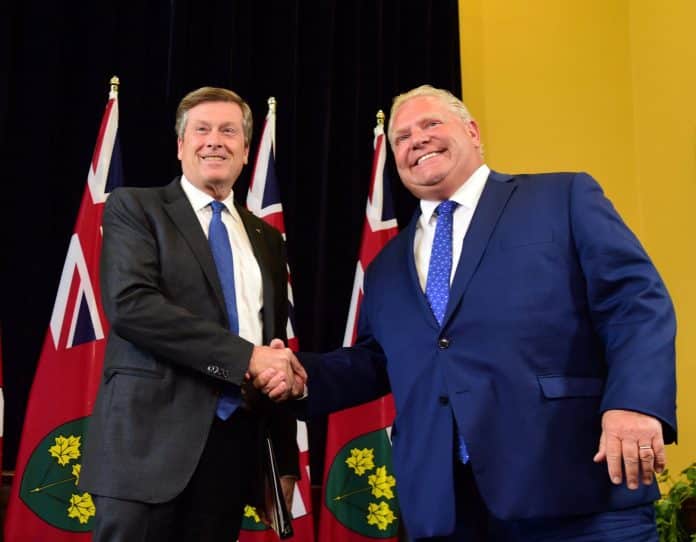 Ontario plans to bring in a so-called “strong mayor” system for Toronto and Ottawa – and is considering expanding that to other cities – as it looks to put more power into the hands of major municipal leaders.

Premier Doug Ford says his government is aiming to have the system in place before municipal elections planned for October.

“I just think that the mayor of Toronto or Ottawa, or any mayor, they’re accountable for everything but they have the same single vote as a single councillor,” Ford told reporters outside the legislature.

“We’ll get into the details later … we’ll do the trial. And we’ll look at the rest of the mayors of relatively large cities.”

On Thursday, Toronto council voted not to oppose the plan to grant the city’s mayor additional powers. However, several councillors are asking the province to consider giving the municipality more control over issues like taxation and housing as part of the governance changes.

Ford said two thirds of a council would be able to overrule a mayor under such a system.

Municipal Affairs and Housing Minister Steve Clark said the province is “still consulting” on whether to expand a “strong mayor” system beyond Toronto and Ottawa to other urban centres.

“We want to put a plan in place. As the premier has said it takes effect for this municipal election,” he said.

“We’ve got a bit of time but the premier and I are both of the same mind. We need to make sure that especially in major cities that those mayors and those councils have the tools they need.”

Clark pointed to the province’s housing crisis as an example of an area in which municipalities would benefit from expanded powers in order to get “shovels in the ground.”

The U.S.-style “strong mayor” system is typically marked by the centralization of executive power with the mayor, who has control over department head appointments, oversees budgets, and sometimes is granted veto power.

Toronto Mayor John Tory, who is seeking re-election, signaled his support for such a system, saying he had previously said he was in favour of a “strong mayor” structure as well.

“I understand this is something that the province is exploring in order to get more homes built as quickly as possible,” he wrote in a statement. “As mayor, I am absolutely determined to get more housing built – no matter what powers I have as mayor.”

Hamilton Mayor Fred Eisenberger, who is also not running for re-election, said he supports granting some additional powers to mayors who are elected with a strong mandate by the public at large. Even so, he said he’s “doubtful” such a change would help resolve the housing crisis.

“Housing is such a complex issue, it’s not just politically driven, there’s land supply issues, there’s interest rate issues, there’s capacity in terms of skilled trade issues. So I think that’s an oversimplification of the housing challenges that we have,” he said.

But there are issues where stronger mayoral powers would be helpful in Hamilton, he said.

“We struggled for 12 years with the issue around light-rail transit, I got elected three times on that mandate and couldn’t fulfil it (until recently) because council balked at moving forward on it,” he said.

Provincial and federal funding was put in place during Eisenberg’s most recent term, and a timeline to break ground was presented this week, but without a “strong mayor” system, that could be undone by a new council, his office said.

Some councillors in Toronto and Ottawa spoke out against the planned provincial move.

Ottawa mayoral candidate and Coun. Catherine McKenney, in a tweet, called the proposal an “anti-democratic move” that would strip decision-making power from residents and their council representative.

In Toronto, Coun. Mike Layton said the issue was not about Tory, about political leaning, or about efficiency.

“It’s about what could happen if this power fell into the wrong hands, regardless of your political stripe,” he tweeted Wednesday.