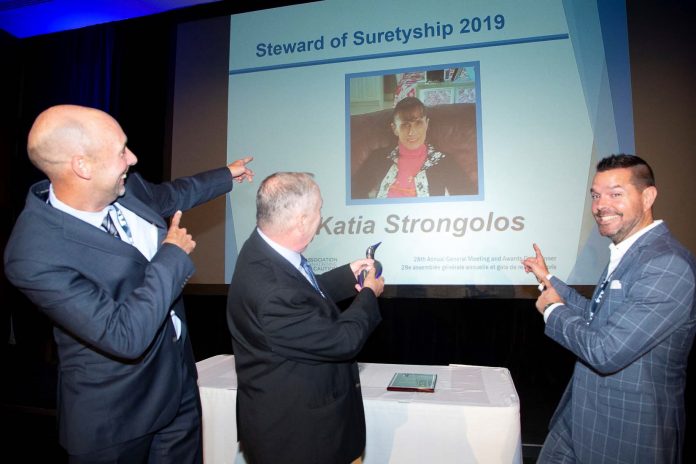 The Surety Association of Canada (SAC) says it has recognized Luc Gauvin and Katia Strongolos with awards at its Annual General Meeting in September.

Gauvin received the President’s Award for the “individual who best demonstrates exemplary volunteer service to the surety industry” and the SAC, the association said in a statement.

He started his career in 1981 and held increasingly responsible positions until he retired in 2015 – but he didn’t stay retired for long. “After only a few months, Mr. Gauvin returned to the surety world where he currently holds the position of senior surety specialist at Trisura Guarantee,” SAC says in a statement.

“From  the very beginning of his career, Gauvin generously gave his time to improving the conditions of the surety industry in Quebec,” SAC says. “He participated as a member of the SAC Quebec Regional Committee from 2001 to 2018 which he served as vice-chair and chair. By his actions, his knowledge and his profile, Gauvin became one of the faces of the surety industry and a strong supporter and advocate for SAC in the Province of Quebec.”

Meanwhile, Katia Strongolos received the Steward of Suretyship Award, intended to “recognize the individual or individuals who have made an outstanding contribution to the surety profession over a career or extended period.”

Strongolos, who started her career in 1972 as an administrative assistant, “demonstrated a combination of energy, smarts, determination and instinct that would serve her well as she moved up the ranks.”

She ultimately became the first female senor executive of a national surety operation, when she became senior vice-president, surety, of what is now known as Aviva Insurance Company of Canada.

“In addition, over the years, she has contributed her knowledge and time as a Board of Director for the Canadian Construction Association, and was an inaugural director of SAC upon its formation in 1992, at the that time, the only woman at the table), and in 1995 she became the first female Chair of the Board.

“Both Luc and Katia have been models of models of professionalism and dedication,” said SAC president Steve Ness.  “Their contributions to the betterment of our industry have been enormous through their active involvement on various committee sand working groups,” he said.