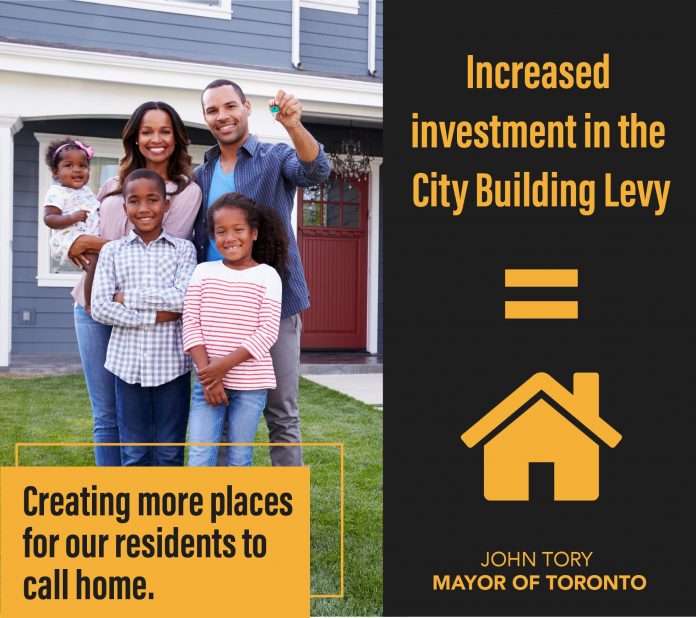 Toronto Mayor John Tory is looking for council approval tomorrow to hike property taxes in order to raise billions for transit and affordable housing projects across the city.

The levy will provide about $6.6 billion for new subways, subway signal systems, streetcars and station upgrades. It will also fund affordable housing projects to help the city reach its target of approving 40,000 housing units over the next 10 years.

“This funding is absolutely needed,” Mayor John Tory wrote in a Dec. 11 letter to council’s executive committee. “It is the only way, given the limited current tools available to us and the current political climate, that we can raise the billions of dollars we need to invest in the future of this city.”

The committee voted unanimously last Wednesday to approve the City Building Fund plan. Council will debate the issue and is expected to approve the increases at its meeting tomorrow.

Tory says without the new levy, the city “will start to strangle itself” on things like congestion and record growth and won’t achieve environmental objectives.

The proposal comes after an Ernst and Young review concluded Toronto’s capital plan “may be unaffordable” without additional revenue.

In his letter to the executive committee, Tory outlined how other attempts to raise funds had failed, including road tolls on the Gardiner Expressway and Don Valley Parkway being rejected by former premier Kathleen Wynne’s government. Also, additional gas tax revenues promised by the provincial Liberals were cut by the current government.

“We cannot lament the current political climate as a reason for inaction in our city,” Tory wrote. “This is the right thing to do to build up our city and protect its prosperity.”

Following the committee vote, Tory tweeted thanks for supporting his plan.

“So, while we are saving millions a year and will find more to save – we will also need billions to build for the future,” he wrote. “I am confident that this is the best way forward, the right way forward and the right thing to do if we want to protect Toronto’s economic success.”