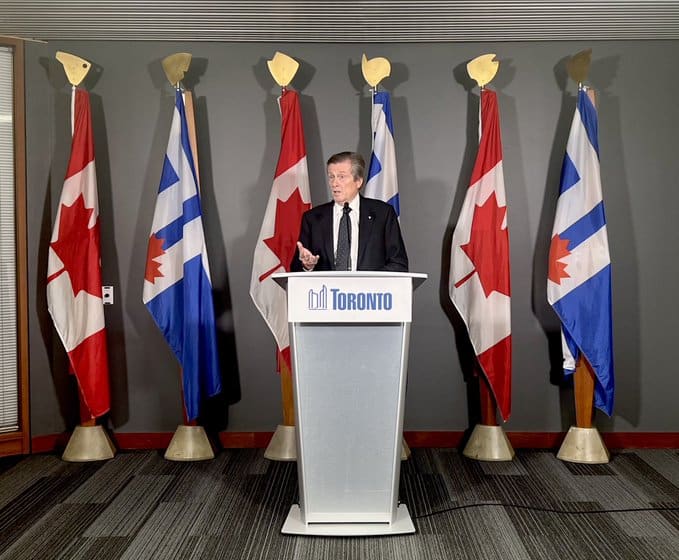 Tory made the announcement at city hall Wednesday, acknowledging an “acute housing crisis” in Toronto and a need for substantial reorganization of existing staff to focus “keenly” on the development approval process to “get new homes approved as quickly as possible.”

“I wanted my first announcement as re-elected mayor to be focused on getting more housing built faster,” Tory said on Wednesday. “we are in a housing crisis in Canada and that is being felt acutely here in Toronto. We cannot shirk our responsibility as a city to help get housing build and we most certainly have to avoid making the situation worse with costly delays.

“The problem wasn’t created overnight and it won’t be solved overnight, but this division will be a significant step forward to address it.”

Tory’s announcement came two days after he was elected for his third term as mayor.

“I’ve indicated to the city staff that I want this division up and running as quickly as possible, and that I will be using the strong mayor powers to implement it,” he said. “I expect this new model will be up and running as a result of all of that by early 2023.”

Tory and new Ottawa Mayor Mark Sutcliffe have strong mayor powers granted by the provincial government specifically with a mind to moving housing development ahead and a veto to override council on matters of provincial priority.

Tory says his new direction is a “fundamental rethink” of bureaucracy to ensure development applications move “as efficiently as possible through our system without sacrificing necessary diligence.”

“this plan a fundamental rethink of our bureaucracy will be a major contributor to ensuring that development applications move as efficiently as possible through our system without sacrificing necessary diligence,” Tory said. “we simply have to do much better as a city government and do it much faster so we can get built for housing remove including more affordable housing.”

Tory said he doesn’t anticipate using the new powers frequently but that he “won’t hesitate” to do so if it’s in the public interest.

Tory’s office said he will be releasing more details about the plans for the new development and growth division in the coming weeks.

Speaking with CP24 Wednesday morning, Ontario Housing Minister Steve Clark said there have been some preliminary discussions about how municipalities could make up the shortfall from reductions in development charges.