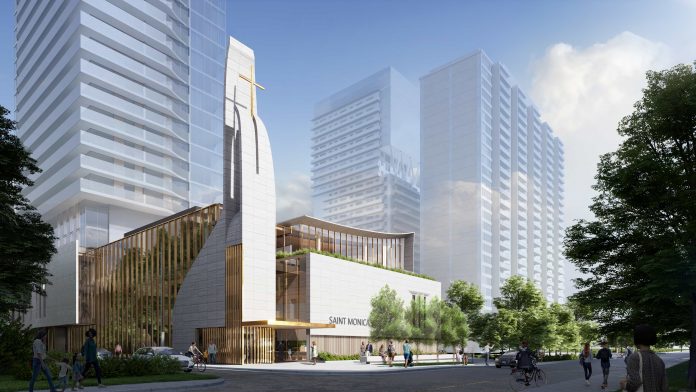 A group of residents want the Archdiocese of Toronto and developer Collecdev to reconsider plans to incorporate a four-storey church building into a 44-storey, 398-unit condo at Yonge Street and Eglinton Avenue in Toronto.

It’s one of 12 neighbourhood associations that have asked Municipal Affairs and Housing Minister Steve Clark to visit the area that they argue was impacted by the provincial government’s decision to overturn a city plan called Midtown in Focus. They say that plan would have “kept development in check.”

In a letter to Catholic archbishop Thomas Cardinal Collins, the residents’ association claims the archdiocese is promoting “another excessively large condominium tower” that would “contribute to the degradation of the community.”

Their “shock and dismay” has been compounded by comments published in The Catholic Register quoting a church official who said, “The more height at St. Monica’s the more money we make.”

According to Collecdev’s website, the development at 44 Broadway, designed by KPMB Architects, is the result of an “exciting partnership between the Catholic community, represented by the Archdiocese of Toronto and St. Monica’s Roman Catholic Church, and two of Toronto’s most respected names in development, KPMB Architects and Collecdev Inc.”

The website project description explains how St. Monica’s Parish and the Archdiocese of Toronto “set out to pursue the redevelopment of the church in a manner that would provide a new home for the parish and ensure continued service to the community for generations to come.”

St. Monica’s Roman Catholic Church has been a beacon of the North Toronto neighbourhood for over a century, and the redevelopment plans at 44 Broadway “will ensure that the site continues to act as a cornerstone for the Yonge & Eglinton community.”

The developer says the proposed design integrates a strong civic presence with a contemporary expression of faith and a 44-storey residential tower that will contribute to the growing demand for housing in one of the city’s largest growth nodes.

“Together, we will create a place that not only preserves and integrates the spirit of St. Monica’s, but reinterprets the notion of community for the modern age.”

The Yonge-Eglinton Urban Growth Centre is the densest in Ontario’s Greater Golden Horseshoe, exceeding the 2017 provincial growth plan targets by more than 50 per cent, she said.

Toronto City Councillor Jaye Robinson has asked the developer to reconsider the application, because “Yonge-Eglinton is at a breaking point.” with constant construction, overcapacity schools, overcrowded transit and a parks and green space deficit.

Development applications approved but not yet constructed could more than double the current population.