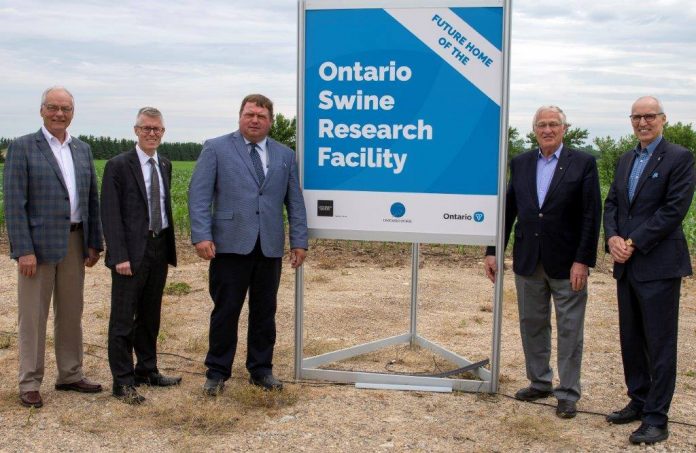 In fairy tales, pigs have used straw, sticks and bricks to construct their homes. The University of Guelph and Ontario Pork are certainly going to take a higher-tech, more advanced approach to building a new pork research facility in Elora.

The $15 million project (with 80 per cent of the funding coming from the Ontario government and 20 per cent being contributed by Ontario Pork (the association that represents pork producers in the province) will be designed as a state-of-the art breeding and research facility. It will be built with biosecurity in mind, including shower-in/shower-out units, the latest in technology to support farrowing (piglet birthing), modern crating designs for pig containment which allows the swine room to roam and move, feeding stalls that give the pigs some level of privacy while they are eating, and molecular and cellular labs to support scientific research and practices such as artificial insemination (which is how the sows will be bred).

The research facility will be replacing the current Arkell Research Station, which was constructed in 1975, and was, at the time, a leading-edge resource. There are also poultry and equine research stations located in Arkell and operated by the university, on behalf of the Agricultural Research Institute of Ontario (a corporate body which reports directly to the Minister of Agriculture, Food and Rural Affairs) but they might not be there for much longer.

“I think there’s a long term view to be able to consolidate facilities on the Elora site. It makes a great deal of sense. Arkell sits on what used to be called a room to grow piece of land. That is one that one would envisage being used for development for the city of Guelph, so if there is a government appetite for making that (land) available, that would be a direction they could go,” says Malcolm Campbell, vice-president of research at the University of Guelph.

The Elora site where the new pork research centre will be located is a 2,300 acre (930 hectare) site that currently houses a crop research station and a cutting-edge $25 million dairy research facility that was opened 2015 and is home to a 200 milking cow operation and a 200 cow-calf breeding operation. Elora will also see a brand new $15 million beef research facility officially open this fall, also set up for 400 animals. Pasture land is also part of the Elora operation, and recently a 21-mile fencing project was finally completed.

The Elora dairy cows are outfitted with a variety of devices to track their movements and measure their output. They sport RFID tags, accelerometers (which Campbell describes as “Fitbits for cattle”) and rumination collars. The RFID tags activate both feed bins and the milking machines that are located in either a rotating rotisserie milking parlour or are attached to milking robots. These types of technology, where applicable, is going to be used with the beef cattle and similar types of devices and applications will likely be put into use at the swine research facility when it opens.

The pork facility will house enough pigs to be considered “production sized, which allows us to do real world studies in a way that is real world relevant,” says Campbell.

He explains one of those studies will involve reducing “boar taint”, a taste or smell that can be found on meat taken from mature, uncastrated pigs. Other studies will cover all aspects of the lifecycle of the pig from reproduction to birth to readying the pig for market.

Pig nutrition is also going to be a major focus of study, according to John de Bruyn, vice-chair of Ontario Pork. Research into pig genetics is also important for Ontario pork producers, as is research into general animal welfare.

As to what that specifically means for the design and construction of the building, de Bruyn isn’t entirely sure. He says it is so early in the planning stage that decisions haven’t been made yet.

“I’m really excited about where we’re at right now. As far as we know, the sheet of paper is blank. Right now the table is flat and nothing has been discounted yet. So that’s the easiest part. I guess now the tough work part comes, balancing the needs of the facility with the budget that we have with trying to meet as many objectives for the industry and for the producers as we can.”

Campbell echoes de Bruyn’s sentiments that it’s too early to state exactly what will be part of the construction project, but once some more consideration has been given to the specifications of the project, it will go through the normal tendering process for a publically funded project.

Still he does have some ideas about what he hopes will be considered as the project goes forward.

“As it stands right now, most certainly, looking to what I’ll describe in broad brushstrokes is environmental sensitivity in terms of the footprint that we occupy and the building that goes up on that site. We’ll be thinking about what the latest in energy provision might look like, whether that’s geothermal, whether that’s solar, about what opportunities might exist there.

“We will ensure environmental sustainability from other perspectives as well, maintaining what we call ecosystem services, so air, water and soil quality. Making sure the build is able to preserve, as very best that we can, those ecosystem services will be front and foremost than in our mind, as we put the building in the ground.

“Of course, we are restricted to a particular envelope in terms of the dollar value. So there will be a necessary consideration of what is it that we want to achieve on the site while simultaneously being able to realize those more ambitious goals.”

Although he can’t provide an exact timeline for the project, Campbell says a reasonable timeframe for the completion of construction and the opening of the new facility would be approximately two years.