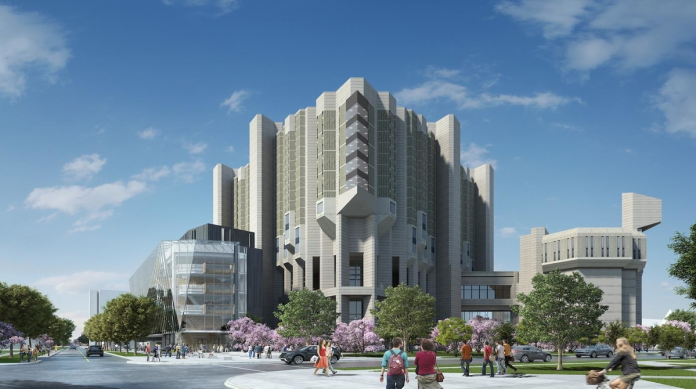 Vaughan-based Harbridge + Cross Ltd. has been making progress in the $25 million construction project to expand the University of Toronto’s Robarts Library.

The 4,304 sq. m. five-story addition, to be known as the Robarts Common, has been designed by Diamond Schmitt Architects.

DataBid.com, quoting Urban Toronto, says the structural steel assembly for the new build’s north and south ends has already been completed. These separate work areas are now being joined by steel work in the middle and the two lowest levels are now structurally complete. Work is now beginning for the mechanical penthouse level above the five levels that are mostly in place.

The report also says installation of the floating staircases that will serve as a key design and circulation element is well underway. The staircases will connect the ground level with the base of the fifth floor.

Construction is expected to be finished next year and the completed addition will add 1,222 work and study spaces to the facility. This will increase the library’s capacity to more than 6,000 seats and will enable the building to be open 24/7 during peak times. An atrium with a cafe will also be included at the south entrance.

The addition will feature glazed surfaces which will allow uninterrupted views both into and out of the building.

Most of the construction has taken place outside of Robarts and since no study spaces had to be closed, there will be minimal disruption during construction.