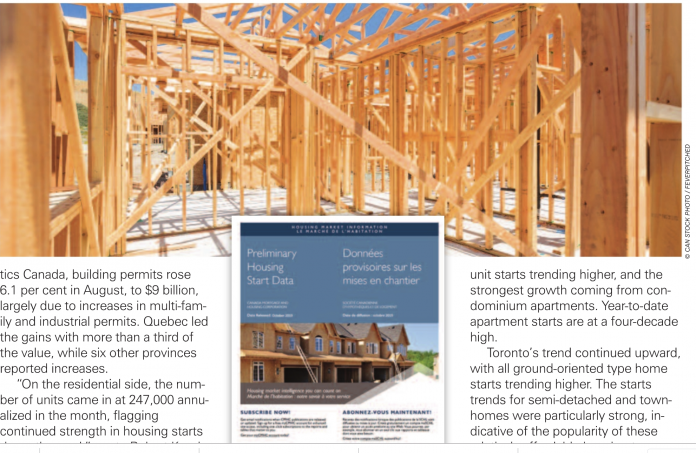 The trend in housing starts across the country was 223,507 units in September, compared to 218,782 units in August 2019, according to the Canada Mortgage and Housing Corporation (CMHC). This trend measure is a six-month moving average of the monthly seasonally adjusted annual rates (SAAR) of housing starts.

However, the agency cautions that the pace slowed compared with August, with the seasonally adjusted annual rate fell 2.5 per cent to 221,202 units in September compared with 226,871 in August.

Rural starts were estimated at a seasonally adjusted annual rate of 12,699 units.

The trend, determined by the number of permits issued for construction, measures a six-month moving average of the monthly seasonally adjusted annual rates (SAAR) of housing starts that dipped 2.5 per cent to 221,202 units in September compared to 226,871 this August.

“Higher trending single-detached starts in urban centres since July, following several months of declines combined with higher-trending multi-family units in September to push the total starts trend to its highest level since April 2018.”

According to a report from Statistics Canada, building permits rose 6.1 per cent in August, to $9 billion, largely due to increases in multi-family and industrial permits. Quebec led the gains with more than a third of the value, while six other provinces reported increases.

“On the residential side, the number of units came in at 247,000 annualized in the month, flagging continued strength in housing starts down the road,” wrote Robert Kavcic, senior economist, at BMO Capital Markets.

“Indeed, the year-to-date average for permits is a lofty 237k, so it looks like there’s plenty in the pipeline to keep residential construction activity humming.”

Also, housing permits fell 2.5 per cent in September on an annualized basis to 221,202 from 226,871 in the previous month, according to Canada Mortgage and Housing Corp.

Canadian home sales outlook jumped as prices experienced the biggest gains in over two years, with single-detached starts falling by 8 per cent to 58,600 units and multi-unit starts were flat at 162,000.

“September’s out-turn caps a strong third quarter for new housing construction which, alongside a probable increase in home sales, points to a healthy gain in residential investment,” a TD Canada economist has noted.

Combined, the two sets of data reflect strong demand, both from international inflows and new households created within Canada.

The trend in total housing starts in the Kingston CMA stood at a 29-year high with single-detached and multi-unit starts trending higher, and the strongest growth coming from condominium apartments. Year-to-date apartment starts are at a four-decade high.

Toronto’s trend continued upward, with all ground-oriented type home starts trending higher. The starts trends for semi-detached and townhomes were particularly strong, indicative of the popularity of these relatively affordable housing types among buyers looking for ground-oriented homes, the report concluded.

Despite condo starts trending slightly lower in September, they continue to dominate housing construction across the Toronto CMA.

The report indicates that rising single-detached home prices in the area are pressuring affordability in both the new home and resale markets and skewing demand toward less expensive housing types.