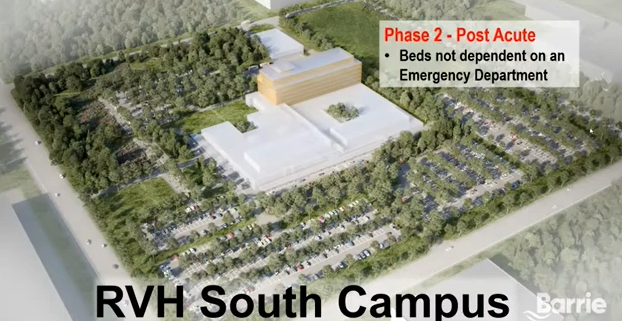 It’s the largest infrastructure project in the City of Barrie’s history – by far.

An upcoming massive expansion at Royal Victoria Regional Health Centre is actually two construction projects – the first is a major redevelopment and expansion at the current hospital site and the second, happening at the same time, is a state-of-the-art new south campus in Innisfil. Expected construction cost for both is estimated at $3 billion. 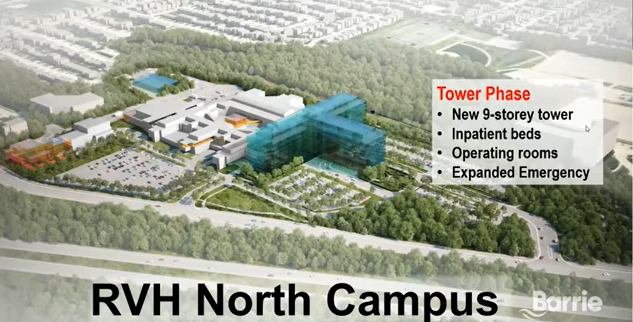 Although officials say it is too early to estimate the construction impact of the $3 billion project on the economy, hospital president Janice Skot, who provided an update to Barrie city council on Monday, compared it to the last expansion.

“We know RVH’s 2012 expansion required a staggering 1.7 million hours of construction work and this project is six times larger,” she said, adding that 80 per cent of the tradespeople and suppliers on the previous project were local.

A new 800,000-sq. ft., nine-storey tower will be built on the same site for additional beds and surgical areas with five new operating rooms, an expanded emergency department and an auditorium for teaching.

Construction will happen concurrently at the south campus which will be built in three phases. The first phase will create space for clinics and services that complement the hospital in Barrie. Twenty years after construction begins, the Innisfil location will be a standalone acute care hospital with 24/7 emergency service available.

The required Stage 1 plan will be submitted to the province later this month and hospital president Janice Skot said she is optimistic that approval will be granted within a year.

At the North campus, the plan will double the size of the current facility for the second time since the facility opened and will add a second 23-bed critical care unit and a third MRI.

Following Skot’s presentation, councillors questioned the city’s responsibility for funding the massive project. Traditionally, hospital construction is paid 90 per cent by the province and 10 per cent by the local community – through municipal contributions and fundraising.

The city contributed over $52 million to the 2012 expansion.

In 2022, however, Mayor Jeff Lehman says the city “does not have room in its budget to ‘make room’ for a major commitment to the hospital.”

“There’s no question our hospital needs expansion, and it won’t be a small one,” Lehman said. “Having been part of the capital planning process, I’ve seen the patient demand numbers, which are a function of growth and an aging population.

Skot acknowledged that the city and Town of Innisfil will be expected to support the capital project, but the “ask” will happen when approval is closer.