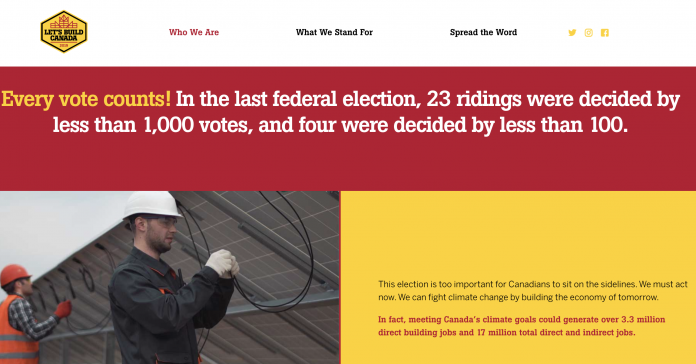 A coalition of building and construction trade unions has launched a get-out-the-vote campaign as the federal election approaches.

Let’s Build Canada (LBC) says it is advocating for building a more resilient, sustainable and fair Canada. LBC advocates for infrastructure built to withstand climate change, an economy which levels the playing field for all Canadians and a system built to train the workers of tomorrow.

LBC says it has the support of seven unions, representing 300,000 Canadian workers in the building and construction sector. “Together, these unions represent Canadians from communities, large and small, in every province and territory,” the statement says.

“LBC’s members understand that the time is now to build Canada’s future,” the statement said. “That’s why Let’s Build Canada will be supporting candidates from any political party who share the LBC values of fairness, sustainability and building the good jobs and careers of tomorrow.

“Canada’s climate is warming twice as fast as the global average. This urgency is why LBC is calling on Canada’s future leaders to act now to embark on an infrastructure-building program capable of building the Canada of tomorrow. Meeting Canada’s climate goals could generate more than 3.3 million direct building jobs and 17 million total direct and indirect jobs.

“LBC is calling on the next federal government to meet Canada’s commitments to fight climate change by building modern, resilient infrastructure that can withstand the impacts of extreme weather and climatic events. By doing so, we can create the kinds of good-paying jobs that can build the middle class and build a Canada we can be proud of for generations to come.

“Over the course of the election, LBC will be active on social media and in ridings near you, working to share our vision of why this election is too important for Canadians to sit on the sidelines.”