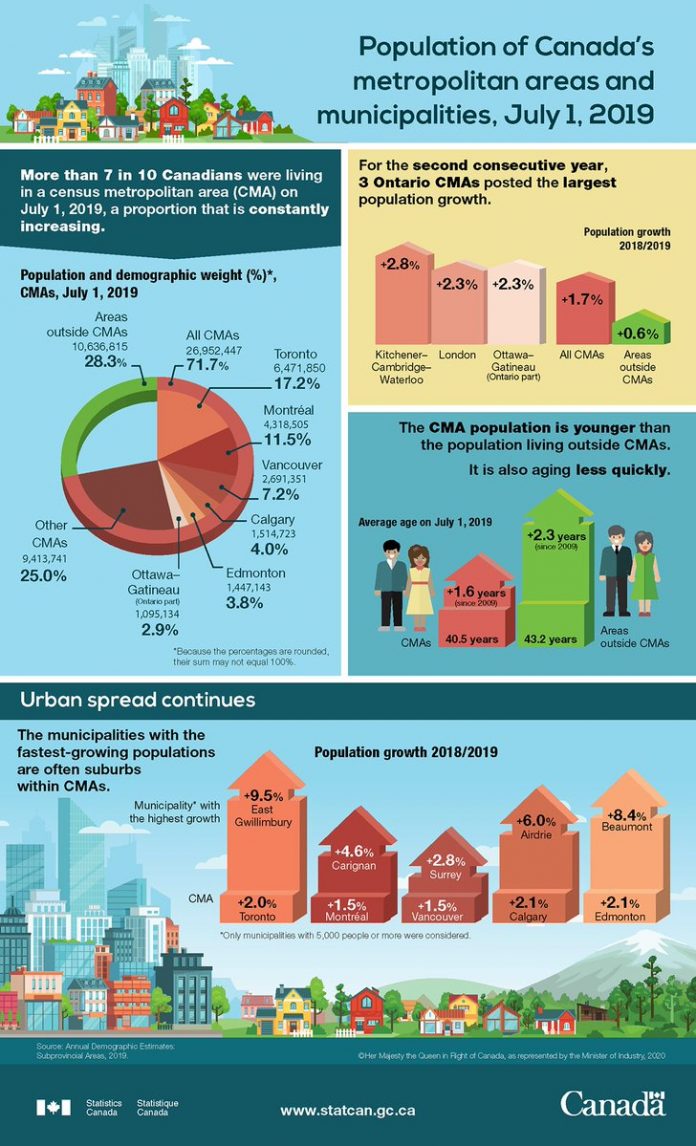 Canada is becoming increasingly urbanized, lead by the Waterloo Region and London, according to new figures released by Statistics Canada that s census metropolitan areas (CMAs) rose to 27.0 million (71.7%) in 2019. CMAs outpaced growth in the rest of the country (1.7% versus 0.6%).

The Stats Canada report links the trends to higher targets for permanent immigration, as defined by Immigration, Refugees and Citizenship Canada, and to various government programs that draw many temporary workers and foreign students to the country.

For a second consecutive year, Ontario was home to the fastest-growing cities, with Kitchener–Cambridge–Waterloo (+2.8%) leading the way, followed by London and the Ontario part of Ottawa–Gatineau (+2.3% each). The arrival of many permanent and temporary immigrants played a key role in their growth.

There were no decreases posted and St. John’s (Newfoundland and Labrador) was the only place where the population remained relatively stable.

Urban spread continues and the report shows that, most often, the municipalities with the strongest growth were in suburban areas. For example, the municipalities of East Gwillimbury (+9.5%) and Milton (+5.0%) had the highest growth in the Toronto CMA (+2.0%). Similarly, Carignan (+4.6%) and Mirabel (+4.1%) recorded the largest population growth in the Montréal CMA (+1.5%).

Toronto, Montréal and Vancouver continued to post steady population growth, mainly due to international migration. However, they also continued to lose people through their migratory exchanges with other regions within their respective provinces. The losses in Toronto (-47,838), Vancouver (-14,241) and Montréal (-14,117) contributed to the growth of areas just outside these areas.