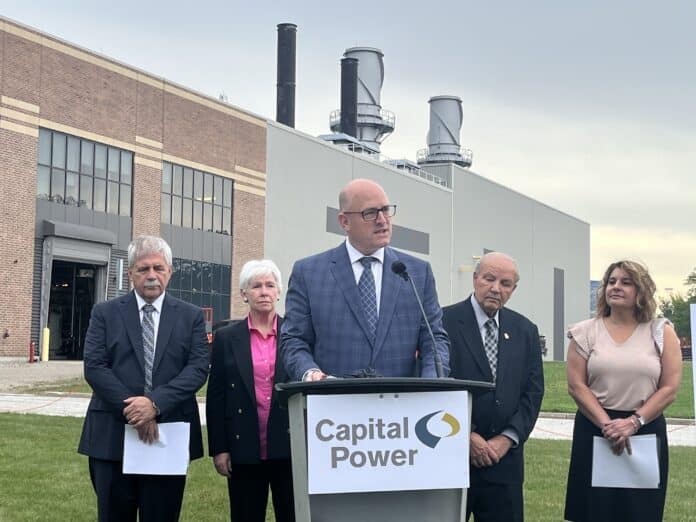 With big capital projects and significant growth expected in Windsor, Capital Power says it’s looking at expanding capacity at its power-generation site in the city.

Capacity concerns have been raised following the announcement of the $4.9-billion Stellantis-LG Energy Solution electric vehicle battery plant, a massive facility slated to open in 2024.

“We are confident that we have viable options for adding significant capacity at this plant, all within the existing one-and-a-half acre site,” Capital Power CEO Brian Vaasjo said at a press conference outside the facility on Wednesday, adding the East Windsor Cogeneration Centre is “ideally situated” to help address expanding energy.

Under the proposal, capacity would be increased with a battery energy storage system to accommodate up to 40 megawatts, enough to power about 40,000 homes. The company is also considering an expansion to increase capacity at the plant.

The Independent Electricity System Operator, which manages electricity in Ontario, will review the options and Vaasio said the goal is for contracts signed by February 2023. Capital Power expects to have additional capacity online by May 2025 or sooner, said Vaasjo.

The IESO has said demand in southwestern Ontario as a whole is expected to double over five years to about 2,000 megawatts. Several projects in the Windsor area were designated priorities by the provincial government to accelerate approvals.

Mayor Drew Dilkens says building local generation capacity is a “critical part” of securing energy reliability. The city has hired a consultant to explore solutions for possible supply constraints down the road.

Energy consulting firm Power Advisory drafted a 68-page report recommending city council ask Ontario to investigate importing power from Michigan. There are some aging power generation facilities in Ontario that need to be refurbished and others have private contracts that are expiring, the report outlines.

“We’re a growing city, and want to make sure we keep growing and have the resources and energy and, of course, the power to make sure that we can continue region’s growth,” Dilkens said.