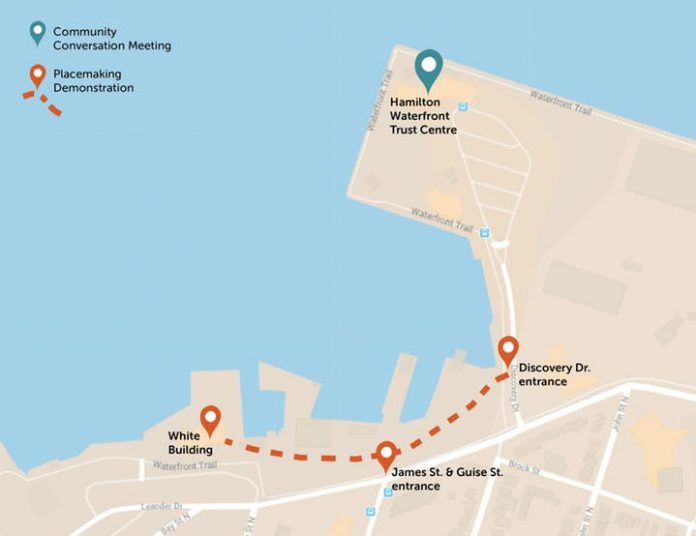 The City of Hamilton is embarking on a public consultation process to assist in developing what they’re calling a Placemaking Plan: a program of ideas for how to use current and future public spaces to make them “people places.”

Representatives from the cityy, together with consultants from Project for Public Spaces, are holding an afternoon event on August 22 to discuss placemaking approaches that will help to engage people and foster a sense of community at the city’s waterfront region.

To spur ideas and open minds to the possibilities for such spaces going forward, the future public trail along Piers 5 to 7 will be opened temporarily from 3-8 PM. Visitors will be able to walk the water’s edge and “experience a series of placemaking activations” during the event entitled Walk It, See It, Talk It. The community discussion of ideas will take place from 6-8pm at the HWT centre. Trolley shuttles will be available to take visitors between Pier 8 and Pier 5 for the duration of the event.

“Strengthening the connection between people and the places they share, placemaking refers to a collaborative process by which we can shape our public realm in order to maximize shared value,” says the Project for Public Spaces on City of Hamilton’s website. “More than just promoting better urban design, placemaking facilitates creative patterns of use.”

The City of Hamilton has been revitalizing the West Harbour area of the city for some time, with a total price tag estimated at $140 million. The project aims to create a mixed-use, pedestrian-friendly community that’s transit-supportive. It’s expected to bring returns through increased economic activity through construction, tourism, and cultural and commercial development.

In June 2018, Waterfront Shores Corporation was given the exclusive right to negotiate contracts with the city to purchase and develop Pier 8 lands, according to their selected proposal.