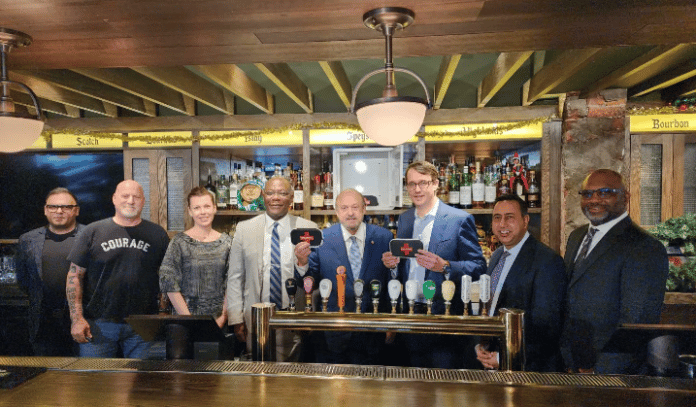 The Ontario government is launching a program to make free naloxone kits and training available at workplaces where there is a risk of staff witnessing or experiencing an opioid overdose including construction sites.

Also, the province will become the first jurisdiction in North America to require naloxone kits be accessible in at-risk workplaces starting next June.

Of the workers who died from opioid-related causes last year, 30 per cent were employed in construction, by far the most impacted industry. Bars and nightclubs have also seen increased opioid use and accidental overdoses, often because of recreational drugs laced with deadly opioids such as fentanyl and carfentanil.

“The opioid crisis in Ontario continues to be a significant public health crisis and unfortunately shows no sign of ending any time soon,” said Shawn McLaren, chief learning officer at St. John Ambulance. “The steps being taken today will save lives and St. John Ambulance is proud to be a partner in this program.”

Businesses can determine if they are eligible for the program and find additional information on accessing naloxone kits and training at Ontario.ca/workplacenaloxone.

In 2021, 2,819 people died from opioid-related causes in Ontario, which is the highest number on record and up from 366 in 2003, the government said in a news release Wednesday.

Naloxone is a life-saving medication that can temporarily reverse an opioid overdose, restore breathing within two to five minutes, and allow time for medical help to arrive.

“Naloxone saves lives, and more access to naloxone will save more lives,” said Paul Rosen, a Paralympian and motivational speaker who supported the announcement. “I should know, it saved my life, and has saved the lives of people close to me.

“I won a gold medal as the goalie for Team Canada’s national sledge hockey team at the 2006 Paralympic Games in Torino and live in addiction recovery from decades of legal prescriptions to opioids from injuries at the highest athletic level of international competition,” Rosen added. “I live by the words ‘never give up’ and am still here because naloxone saved my life.”

Ontario, like the rest of Canada, is in the middle of an opioid epidemic made worse by a toxic supply of recreational street drugs, said Monte McNaughton, minister of labour, immigration, training and skills development.

“That’s why our government is the first in North America to require naloxone kits be accessible in at-risk workplaces, to raise awareness for those struggling with addition, reduce stigma and save lives,” McNaughton said.

For up to two years, Ontario will provide free nasal spray naloxone kits to businesses at risk of opioid overdoses through the Workplace Naloxone Program and free training needed to equip staff with the tools to respond to an opioid overdose.

Ministry of Labour, Immigration, Training and Skills Development inspectors will take an education-first approach to enforcement.

Ontario says it has hired more than 100 new inspectors to build the largest workplace inspectorate in the province’s history and increased occupational health and safety fines to the highest level in the country.