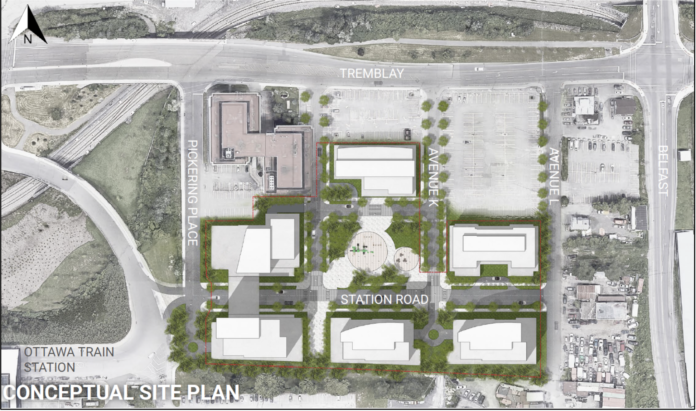 Developer Colonnade BridgePort plans to redevelop about 20,000 sq. m. near Ottawa’s main Via Rail terminal into a massive project including six blocks for mixed-use highrises, which could be as tall as 30 storeys.

The proposal for the project at 25 Pickering Pl. (with a municipal address of 1330 Ave. K) filed on Aug. 5 is on a site currently occupied by Dustbane Products, which will “incrementally leave the site as it is redeveloped,” the development application says.

“A 1,482 sq. m. park is proposed as the central unifying feature of the development, planning consultants Novatech says in the development application’s  planning rationale. The entire site would occupy about 20,000 sq. m.

“There is currently negligible residential development around Ottawa and Tremblay Stations. At the same time, it is very recognizable location. The proposal is likely to include residential uses and will create a distinct high-rise urban community. Its identity will emerge in time, but will be centred on the central park, the tight network of streets and the proximity to the LRT and VIA Rail stations.”

Stephen Martin, Colonnade’s director of development, told OBJ in March that  the land’s proximity to public transit and ready-made zoning for mixed-use highrises made it an attractive development site.

“From a connectivity point of view, there isn’t anything else like it in the city,” Martin was quoted as saying, adding the site has potential for more than two million square feet of residential and commercial space.