Home Around the province Dundas Place Flex Street and other core projects are moving along in...
Facebook
Twitter
Email
Print
Copy URL 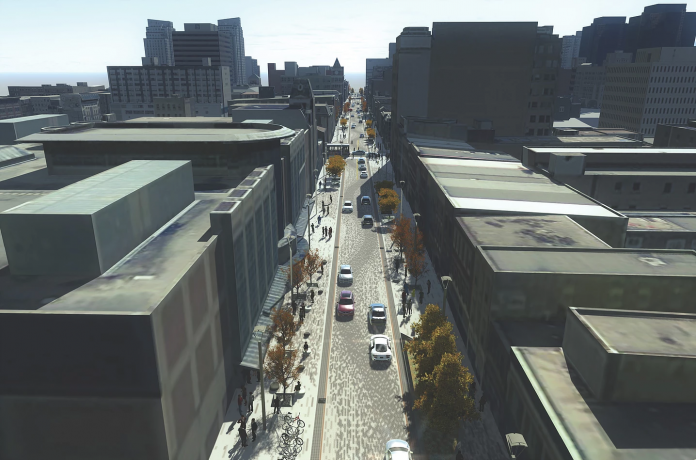 Full-on into construction season, the second phase of London’s Dundas Street revamp is well underway. Duct work could be seen snaking in underground trenches between Richmond and Clarence Streets during June and into July, on what used to be the surface of Dundas Street.

Most underground work is now complete on that block, and it’s back up to the level of a roadway. But work on underground infrastructure like hydro lines and water mains continues to cause lane closures on intersecting streets for days at a time, and to push pedestrian paths along Dundas street away from more involved construction zones.

Dundas Place’s project manager, however, writes in the Dundas Place blog that construction is on schedule, and crews work extra time to make up for delays caused by hot weather and holidays to make sure they stay on time.

Dundas’ flex street project is well into its second phase, is the first phase, between Ridout Street and Richmond Streets, opened for use in December of 2018, after nine months of work.

A flex street is a pedestrian-friendly thoroughfare, meant to be a hub for arts, culture, and community within the downtown. The street can be used as normal for both vehicle and bicycle traffic, or “toggle” to a pedestrian-only area for festivals, concerts, or other events.

The entire project is budgeted at $16 million, the majority of the costs going to infrastructure costs like water main replacement.

The second phase will see the area between Richmond and Wellington revamped during this summer and fall, so that area of street is now heavily torn up. The intersection at York and Richmond Streets have also been closed since July 2 as infrastructure replacement happens there, as well.

A third of this year’s core construction projects on King Street is completed and open for use.