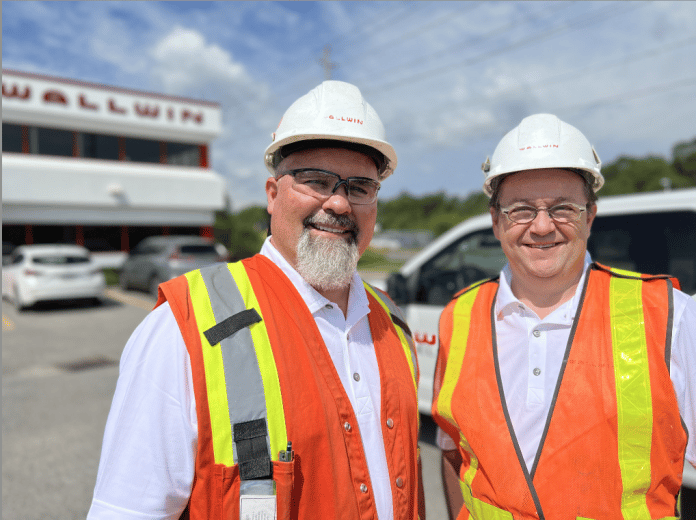 A team from the Northern Tornadoes Project returned to Barrie recently to survey the work to rebuild neighbourhoods hit by an EF-2 tornado in July 2021.

“I’m actually surprised by the number of houses that are still not being lived in,” said Greg Kopp, the ImpactWX chair in Severe Storms Engineering, lead researcher for the project based at Western University in London.

The city issued over 70 unsafe orders after the storm and insurance companies have paid over $90 million to about 1,500 Barrie homeowners and $10 million to 125 businesses directly affected by the twister.

In the wake of the tornado, there were calls for changes to the building code from residents and government official. The city submitted a report to the Ministry of Municipal Affairs and Housing calling on the province to update the Ontario Building Code with a mandated set of changes for all new houses and other stick-frame residential construction.

A team of six Wallwin Electric Services Ltd. electricians arrived at the site under police escort while barricades were still being set up, company vice-president Tim Southorn said. They installed portable generators and connected light towers to help power the Barrie Police command centre, support public safety and  to assist personnel from local utilities who were working to secure the site and clear the way for engineers and restoration contractors.

“I know it was fast,” Southorn said of the response time to the tornado that caused over $100 million in damage, injured 11, left more than 75 homes uninhabitable – with some torn clear from their foundations – and triggered a rebuild that continues past the one year anniversary mark.

“The city and police and utility contractors were right on it.”

Like Wallwin, a 60-employee company that provides disaster preparation and response in York and Simcoe counties and 24-hour emergency service to the City of Barrie, K. Winter Sanitation Inc., responded quickly.

“We donated four portable toilets with sinks the day after the tornado,” said Roger Winter, vice president of the Innisfil-based portable restroom operator. “No one ordered them, we just dropped them off to help the first responders and the people cleaning up their properties.”

He said the company also donated portable toilets at the request of Barrie councillor Jim Harris to a community information night, and for the weekend for a church group to clean up yards.

“We’ve been here for 58 years so we try to give back to the community,” Winter said.

K.D. Clair Construction Ltd. is another Barrie-based Barrie Construction Association (BCA) member that was involved in the tornado response. Owner Kyle Galashan explained that he was contacted by United Rental “to find out if we could utilize one of our telehandlers to lift off one of the badly damaged roofs.

“They didn’t have any available on such short notice. Our jobsite was close and I was able to drive our forklift over and help the clean-up crew safely remove the roof,” he said. “This was an urgent safety matter on the Friday afternoon and evening due to the precarious position the tornado had left the roof in.”

“The construction response was really fast. The response was very well done,” although he said a more explicit alert could have been provided to the public given the severity of the storm and how quickly it hit. 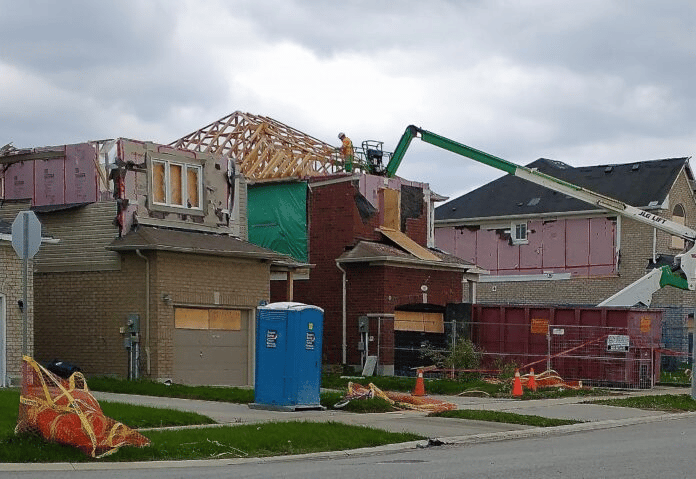 Restoration companies, Latour added, are ready to respond immediately to calls for assistance from insurance companies who typically send memos to contractors around catastrophic events telling them to stay by their phones.

“It’s impressive how quick the information gets passed through.”

The initial response to the disaster saw teams of volunteers cleaning up debris using dumpsters Latour said were provided at no cost.

While numerous BCA member firms were involved in the recovery and rebuilding process, an official from one member company that wasn’t involved as a contractor or a supplier was directly impacted nevertheless.

“My house was destroyed,” said Roberta Hall of Barrie-based Prycon Custom Building and Renovations Inc. “We had to rebuild from the foundation up.”