The fall economic statement delivered by Deputy Prime Minister and Finance Minister Chrystia Freeland last week is being met with criticism from her provincial counterpart.

“While our government welcomes many of the initiatives included in today’s Fall Economic Statement, we can’t help but notice the absence of support to move transformational projects forward that are critical to Ontario and Canada’s economic success,” said provincial finance minister Peter Bethlenfalvy. “Although we welcome funding to support speedier federal reviews, the real opportunity is in eliminating redundant federal review processes in support of Ontario’s robust environmental assessment process.

“As we continue our work building the road to the Ring of Fire and unleashing the economic potential of critical minerals, the federal government should make a real commitment to be a full partner by working with us to make Ontario and Canada more competitive by streamlining cumbersome review processes. We also expect the federal government, at minimum, to match Ontario’s investments to support critical infrastructure in seizing this opportunity.

The fall economic update predicts this year’s deficit will be $90.2 billion, lower than what was projected in this year’s budget. That is due in large part to economic growth this year and soaring inflation, which boosted the federal government’s revenues by billions even as it impacts consumers. Freeland also warned of a looming recession expected to impact Canada early next year.

“We think we need to strike a balance today between on the one hand, being fiscally responsible, keeping our powder dry given the global economic uncertainty and on the other hand, being compassionate, providing support to those people who need it,” she said.

In Ontario, however, officials were expecting infrastructure spending and help with the labour shortages to be included in the federal update. Bethlenfalvy also said the federal government should be focused on the housing crisis.

“At a time when Ontario and other provinces are facing historic labour shortages, today’s Fall Economic Statement was a missed opportunity to dramatically increase the number of skilled newcomers who come to Ontario and Canada each year,” he said, urging the federal government to continue working with provincial partners to enact and expand programs that help fill labour gaps through immigration. 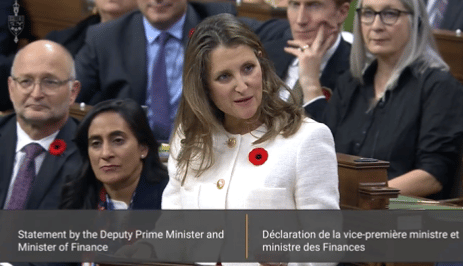 “For many Ontarians, finding a home is still too challenging. As our government takes bold action to build 1.5 million homes over the next 10 years, including more attainable housing options, we expect the federal government to make real their commitments around their $4 billion housing accelerator fund so we can get more homes built faster.

Prior to Freeland’s statement, the federal government announced it will seek to increase immigration to record levels, bringing in 500,000 arrivals in 2025. Liberals plan for the majority to be skilled workers who can help fill labour shortages in healthcare, manufacturing and the building trades.

In a time of economic uncertainty, Canadians across the country will be looking to federal and provincial governments to address their concerns. Our government will continue to call on the federal government to join us at the table,” Bethlenfalvy said.