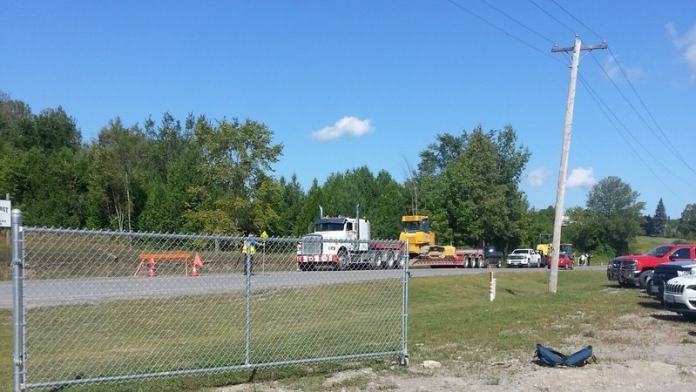 Construction of a gas station on the Hiawatha First Nation was blocked last week, when opponents set up a blockade and workers were escorted off the site by Peterborough County OPP.

It’s not the first time the site has been shut down in an ongoing dispute between construction company Tri-Land Excavating and Haulage and opponents including the band chief and council – at odds over permits and concerns about wildlife disruption. Those fighting the construction say they fear environmental and financial impacts, but the site owners say they have addressed those issues.

Excavation on the property started July 15 and continued for two weeks, but a Hiawatha First Nation council resolution was passed two days later, placing a moratorium on any new business development or expansion until a land code is completed. A trespassing order was delivered to the construction company in August, preventing them from working.

Hiawatha First Nation’s Chief Laura Carr maintains that the three partners did not seek any approval or community input before going ahead with their plans.

“This whole process has been disrespectful to chief and council, and the community,” she told the Peterborough Examiner at the blockade site. “Why did they have to hide it from the community?”

Both sides have distributed flyers to band members to solicit support for their cases. Those against the gas station claim construction has already caused significant damage to the wetland area, while the builders say gas stations don’t harm the environment.

Claims are shot down by the landowner who says “Environment Canada reviewed the site and the plans, and approved the project.”

Mindi Wickett has collected more than 3,700 signatures on an electronic petition against the gas station.

“The ongoing development of this potential gas station has caused significant damage to the wetland area where habitat and wildlife have been traumatically affected,” she said. “This area is known to have diverse wildlife including various species of turtles which are deemed at-risk and who make this wetland their home and nesting area.”

The petition also alleges there will be a financial impact on the community and loss of employment for Hiawatha citizens. Hiawatha already has a gas station  owned by Hiawatha First Nation, and revenue funds infrastructure and educational programming at Hiawatha.

“We are asking for your support to protect the water, the animals, our community, our youth and those generations to come, by signing this petition and stopping the gas station development in the best interest of our collective community.”

The petition will be presented to the Chief and Council.

According to Tri-Land Excavating and Haulage, the station will employ up to nine locals at higher than minimum wage, the wholesaler will organize a holistic and recreational fund, along with a post-secondary educational grant fund for the community.

“This is about the fear of competition, that’s all,” the owners’ flyer states.