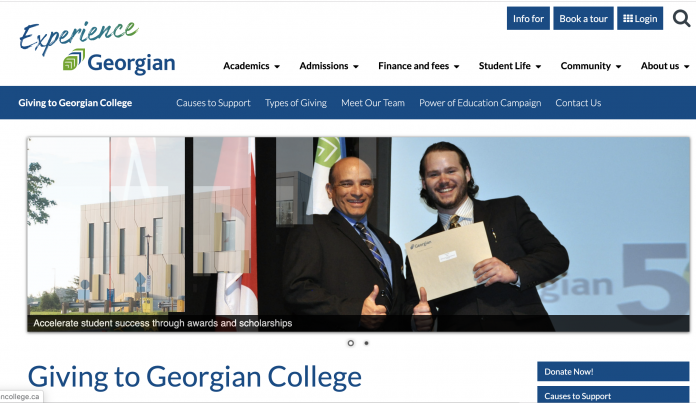 Transforming the student experience was the focus of the second phase of Georgian College’s Power of Education Campaign and, thanks to community support, the campaign exceeded its $40-million fundraising goal.

At the close of the campaign, Georgian had raised more than $54-million to support capital projects and scholarships that will benefit students at all seven campuses and the downtown Barrie location. The campaign was supported by alumni, students and friends, corporations and foundations, as well as through government investment at the municipal, regional, provincial and federal levels.

“To maintain its edge, Georgian must continue to deliver a transformative student experience,” said Mike Stollery, president of the AutoIQ Network and Power of Education Campaign Chair. “One that empowers students to learn any time, anywhere; uses technology to enable and expand access to learning; and prepares graduates to be changemakers, ready to adapt and innovate in a constantly evolving economy.”

In 2014, the County of Grey Council committed $2 million, followed by provincial and federal government investment, as well as private industry support, resulting in the 2016 opening of the Algoma Central Corporation Marine Emergency Duties (MED) Centre at the Owen Sound Campus. The 13,600-sq. ft. facility is a key part of Georgian’s Centre for Marine Training and Research.

That same year, the college opened the Segal International Centre at the Barrie Campus to better serve the growing number of international students. The centre features an experienced team of multilingual and culturally astute staff who support more than 3,600 students from 85 countries.

Early in the campaign, the Georgian College Alumni Association funded the development of fully equipped videoconferencing classrooms that allow students enrolled in programs at all Georgian campuses to benefit from the technology.

The largest campaign gift came from those with a direct stake in the outcome – the students. The Georgian College Students’ Association (GCSA) made a $7.2-million commitment to the campaign that supported a number of priorities across Georgian campuses, including renovations to student spaces in Orillia, Owen Sound and Barrie, phase one of the sports field at the Barrie Campus and the implementation of a student portal providing any time, anywhere access for all Georgian students.

“Since joining Georgian, I’ve seen the commitment to excellence that our students, staff, alumni and communities expect,” said Dr. MaryLynn West-Moynes, president and CEO, Georgian College. “It’s that commitment that has made reaching and exceeding the goal of the Power of Education campaign both necessary, and possible. We deeply appreciate our Board of Governors and campaign volunteers for their tireless efforts, and are truly grateful to our community of donors and industry partners for their incredible generosity. We have an exciting future ahead of us.”

Other notable successes include the naming of the J.C. Massie Field in 2017 in recognition of improvements to the sports field, extending its use and reach into the community, and in 2018 the grand opening of the Peter B. Moore Advanced Technology Centre.

The new $30-million, 56,000 sq. ft.  facility is providing students and industry partners with access to research, commercialization, incubator, changemaker and fabrication spaces and is home to the first engineering, environmental sustainability and computer science degrees in Central Ontario, offered in partnership with Lakehead University.

Federal funding from the Post-Secondary Institutions Strategic Investment Fund was matched by commitments of $5 million respectively made by the County of Simcoe and the City of Barrie. Furnishings and future-ready equipment and technology were supported by major gift donors such as Peter B. Moore, owner of Moore Packaging, the Automotive Business School of Canada Board of Directors, Alectra Inc., Honda Canada Foundation, the GCSA, AutoIQ.ca Network, Innovative Automation Inc., and Jane Brown Jackson.

Those who support Georgian understand that investments in the college are investments in the broader community and the future success of our region. “I’ve been involved with the college for many years and feel strongly that it has a huge influence in our community,” said Jamie Massie, president and CEO of Georgian International and Honorary Campaign Chair. “My business has grown in part due to the talent pool of Georgian graduates, particularly on the automotive side. Investing in Georgian is synonymous with investing in our community.”