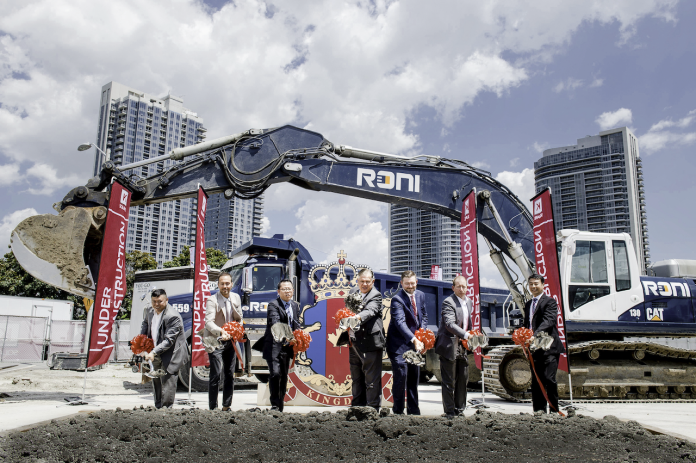 Kingdom Developments, with roots in China, has broken ground on a $300 million Scarborough mixed-use condo project.

The KSquare Condos at Kennedy and Highway 401will have two towers, rising 31 and 34 storeys from a shared seven-storey podium. The structures will ultimately occupy 485,00 sq. ft. including residential, office and retail space.

IBI Group designed the project, which is being built by Skygrid Construction Ltd.

“We’re thrilled with the opportunity to start construction just one month after our sales launch,” Eric Jensen, Kingdom Developments’ vice-president, projects. “This speaks volumes to the success of KSquare Condos and the significant demand the project commands from both end-users and investors who recognize the incredible value and ownership opportunity that KSquare presents.”

The development company started Kingdom Canada in Vancouver in 2014 with “a number of mid-rise and custom-home projects” and moved to Toronto about two years ago, Jensen told Real Estate News Exchange (RENX) at the June 27 groundbreaking.

Toronto is “an incredible market, it’s an incredible city. It is the most diverse city on the planet and I could go on and on about my love for Toronto,” said Jensen. “Kingdom shared that same vision of it and they think it’s a great market to be in to help further their vision of how they see land development going.”

Amenities for KSquare’s 644 residential units will include “Toronto’s largest private library,”  with soundproof music rehearsal stations, a sports bar, yoga centre, and an “organic forest approach” to the seventh-floor terrace.

In addition to the Scarborough development, the company also plans another mixed-used development at the former Sheridan Nurseries site in Markham.

“We are working through the zoning and the planning process at this point,” Jensen told RENX. “We’re hoping to launch sales on the first phase probably next year. There’ll be condominium, there’ll be retail.

“As we step back off Highway 7, again, there will be more ground-floor retail, there might be some office space. We’re still weighing all this in but certainly, it will be condominium and residential towers.”

Kingdom is a privately held, broadly-based group of companies operating in Vancouver, Toronto and China. Its portfolio includes millions of square metres built and developed, including residential and commercial projects, entertainment complexes and conference centres.

Jensen said the planned Markham project will be “bigger” in terms of dollar figures than KSquare.