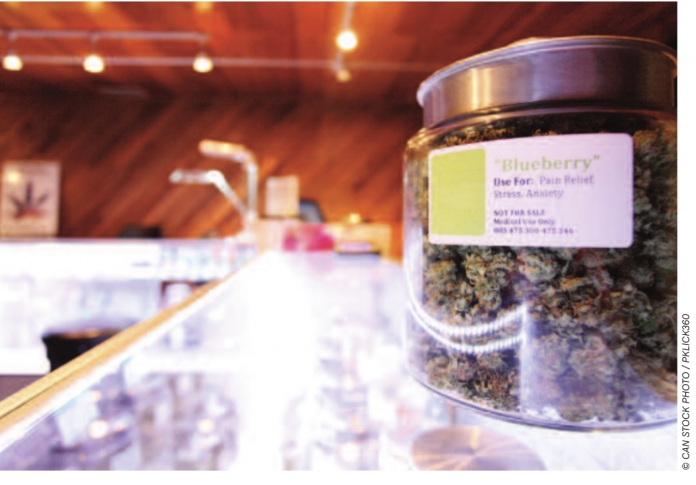 A former manufacturing facility in Kawartha Lakes is about to get a new lease on life as a medical marijuana production operation.

A 78,000 sq. ft. building on property located along Highway 36 used to be home to trailer manufacturer Fleetwood Canada, but the U.S. parent company closed the plant in 2007 and the site has sat empty for years. The property has been purchased by a Markham-based psychiatrist who has obtained a licence from Health Canada to take the first steps to begin growing the types of cannabis doctors can prescribe to their patients.

According to Nisha Kumar, director of Fleetwood Pharmaceuticals Ltd.—yes, the new company’s name reflects the history of the site—Dr. Ghulam Khan was originally skeptical about the benefits of medical marijuana, but as he began to see more and more patients admit to treating themselves with the drug, he eventually began to refer people to clinics where they could obtain legal prescriptions. As patients with illnesses including insomnia, generalized anxiety disorder, and depression began reporting that they felt better and their symptoms were improving, Dr. Khan became convinced in the marijuana’s efficacy.

“So then he thought one day, ‘why don’t I start something where I can do harm avoidance by providing quality controlled medical cannabis to patients, instead of them having to go to the street, or not knowing where to get it from? We could have our own medical cannabis facility to help the patients … Why wouldn’t we want to try?” says Kumar.

She explains that at this stage in the licensing process, Fleetwood is permitted by Health Canada to start growing plants. Then, those plants have to be submitted for testing and quality control checks before the final production permit is granted.

Of course, before growing can begin, the building has to be adapted for the task. That means installing basics like security measures, including cameras, a new HVAC system, piping, and other infrastructure updates.

Interior renovations are also required, and Kumar says Fleetwood is in talks with a company that provides pre-fab rooms that can be built off-site, delivered and installed, all within a short timeframe. Before that can happen, however, the company needs to obtain funding. Currently, Fleetwood is in negotiation with a bank to obtain financing for capital costs.

What isn’t needed is site remediation or rezoning.

“It’s still an industrial use. So there’s no requirement necessary to clean it up from that perspective, or from a regulatory perspective. If they wanted to do some investigation [into environmental remediation] on their own they certainly could, but there’s no trigger from our end to do any sort of site remediation,” explains Richard Holy, manager of policy planning for the City of Kawartha Lakes.

He adds that the city considers marijuana production “an industrial use, a manufacturing use. You’re producing the marijuana within the building, you’re processing it, and you’re manufacturing a product and warehousing it, so from our perspective, it’s a use that meets the zoning of the property.”

Holy also says that redevelopment of the site is a positive for the community.

“From our perspective, they’re reusing an existing an existing building, which is always great. You always want to see your vacant buildings used. It certainly presents a lot better from a community’s perspective. I think it’s a great news story for our community.”

If everything goes to plan and the company receives not just final approval from Health Canada but manages to find either investors or additional sources of financing, then Fleetwood would be able to embark on stage two of its plan. That involves building 500,000 sq. ft.  of greenhouses. Kumar says ideally that would happen within six months or so, but more likely it will occur next summer.

As plans for the greenhouses haven’t been drawn yet, Holy says he can’t speculate on whether they would be approved.

“We haven’t really run the numbers on that … Obviously, we have to take a look at that to see what the parking requirements are, what the implications are,” he says.

When it comes time to ramp up the planning and actually start construction, Kumar says Fleetwood will be looking for local expertise.

“We would like to let (your readers) know that we give preference to people in the city of Lindsay, for any type of job opportunities in all professions, from labor, to engineers, to architects to electricians. Only if we cannot find the person that we’re looking for, would we go outside of Lindsay to look for the right person to work for us. That’s something we want to give back to the city for allowing us to start this project.”

Even if Fleetwood manages to get its greenhouses built, that isn’t the end of any potential construction projects. Kumar says the Fleetwood vision includes building a medical marijuana dispensary or clinic in the area because there are none in the region. It’s the same reason why Fleetwood is located where it is.

“Peterborough, Lindsay, Belleville, they don’t have any sort of place for people to go (and purchase marijuana) and there are a lot of people in small towns that do street drugs. (Dr. Khan) thought it would be a good idea to go to a city where they don’t have this type of facility already in it. It would be easier for him to have the public support and the mayor’s and the counsellors’ support to get this going a little bit faster than other cities where they already have other existing (licensed production facilities.),” says Kumar.

While Dr. Khan was granted the production license by Health Canada, Kumar says the government doesn’t give dispensary licenses to people who hold production licenses, so somebody else associated with Fleetwood would have to put their name forward to obtain any additional permits.