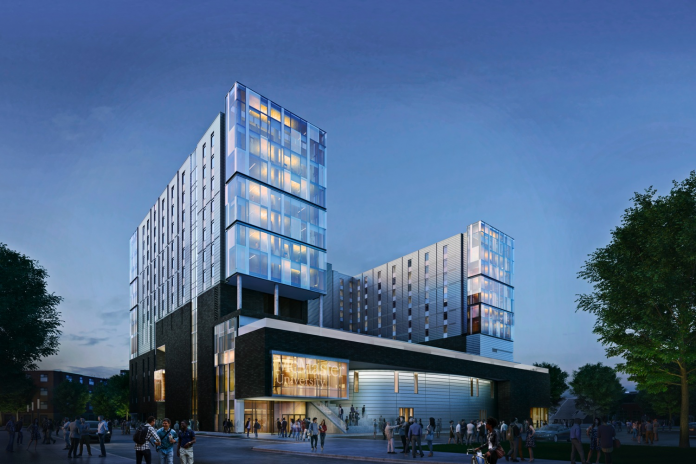 McMaster’s new Peter George Centre for Living and Learning (PGCLL) is the first student residence to be built on the university’s campus in over fifteen years. It will provide lodging for 500 additional students, helping to fulfill the university’s goal of offering residence to all admitted first year students.

But the building will be much more than merely a residence. The vision for the building is for it to be a hub for students on campus, and bring together different factions of student life.

The 340,000 square-foot facility, scheduled to open in September of 2019, will include many other amenities for students, including two lecture halls, underground parking, and a daycare.

The building will also feature an active learning classroom, which allows students to collaborate and problem solve. This state-of-the art classroom requires special consideration in building, including extensive wiring for connectivity. The Student Wellness Centre will also be housed at PGCLL, and will offer medical and counselling services.

Debbie Martin, assistant vice-president and chief facilities officer at McMaster University, says the amenities were chosen carefully from focus group responses. “All of the features included in the PGCLL are tailored towards enhancing the student experience at McMaster,” Martin says.

The PGCLL is being erected on Michell Crescent at the north end of campus. Martin says its mix of features and functionality poises it to be a transition between the residential areas of campus and the more academically-focussed buildings.

“The success of this project is in providing a cohesive and integrated building while allowing for very distinct functional areas,” Martin says. Also in the neighbourhood is the David Braley Athletic Centre, which is undergoing an extension and revamp due to open in during the 20/21 academic year.

The building’s namesake, Peter George was the school’s president for 15 years. He passed away in 2017 after a brief illness. George was an economist and university administrator and made a tremendous impact on campus.

The PGCLL is an $118 million project, overseen by Diamond Schmitt Architects. Recent Diamond Schmitt projects at McMaster include the Gerald Hatch Engineering Centre for Experiential Learning, the Centre for Biomedical Engineering & Advanced Manufacturing and the CANMET Materials Technology Laboratory at the McMaster Innovation Park.

The construction manager is Ellis Don.

Martin says the building is poised to provide incredible views in all four directions. “The Student Residence has lounge areas on each floor providing amazing views of the Stadium football field, a view to the south of central campus, Cootes Paradise and the Royal Botanical Gardens sanctuary to the north and west,” she says.